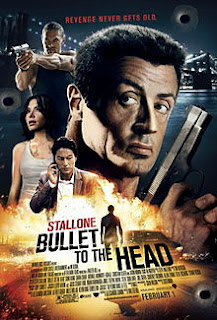 Damn, I love this second golden age of action films. Just in the last month, we've had new films for Schwarzenegger, Statham, and Stallone who just so happens to be the focus of this review. I certainly had high hopes for "Bullet In The Head" as Stallone teams up Sung Kang, Jason Momoa, and legendary action director Walter Hill. Although the film had a few surprises to throw at me, generally speaking it was exactly what I wanted from this film despite being a little too formulaic for its own good. I would hesitate to call "Bullet To The Head" a great film for sure, but it did deliver just what I expected.

Jimmy Bobo (Stallone) might be a ruthless hitman, but that doesn't stop him from being loyal to his partner. After a recent hit though, Jimmy finds that they have been double crossed and his partner lies dead at the hands of a mercenary (Momoa). With the help of a detective (Kang) sent from Washington DC, Jimmy is going to find his partner's killer and give him what he deserves. Can the two unlikely "partners" team up to uncover a larger conspiracy or will they end up killing each other?

Although it can be loosely defined as such, "Bullet To The Head" is a fine addition to Walter Hill's rather impressive 'buddy cop' film list. Shockingly so, this new school meets old school action flick is surprisingly dark and violent. I knew going into it that it was rated R, but the throw back style of the script certainly highlighted the darker elements that made 80s action films so good. Stallone might end up being a rather subtle and hollow one beat character as the hitman Bobo, but he definitely owns in the role as a bad ass and becomes quite the anti-hero to follow. This darker tone, which was not alluded to in the trailers whatsoever or in the fact that the original director of the film was let go for making it too dark, does allow "Bullet In The Head" to go some places that it needed to go. The violence is there for sure as is some of that gratuitous nudity (mostly to make Christian Slater's corrupt lawyer seem even more sleazy), but the darkness of our leads makes for a rather intriguing spin on what I thought was going to be more of a light hearted and "wink-wink" throw back affair.

Unfortunately, despite some intriguing characters and the violence to punctuate them, "Bullet To The Head" eventually falls to its own devices. Far be it for me to criticize the director who essentially created 'the buddy cop' formula for following his own design, but "Bullet To The Head" ends up being a very predictable film that fails to truly intrigue. The mysterious conspiracy that the two fall into is about as 'by the book' as it gets for these kind of films and the majority of its run time is spent going through the plot motions instead of delving into the intriguing characters. Both Stallone and Kang end up drifting in roles that seem too shallow to truly hold up the film and their banter, although having some great moments, ends up being a bit too predictable in itself too.

For action fans, "Bullet To The Head" delivers on what it promised - an often fun and violent ride that mirrors some of the great action work in the 1980s with some intense action sequences to boot including a very intense axe fight between Stallone and Momoa that steals as the high point of the film. The darker shades of the film make for a unique spin that I wasn't expecting, but the formulaic script and underdeveloped characters do leave one wanting a bit more. Although I was hoping for more from "Bullet In The Head" it's hard not to enjoy it for what it is. Now I'm just curious to see if it begins to cater to a cult following...