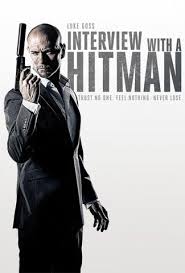 Luke Goss has been on the brink of leaping up to the big leagues of an action star for a couple years now. His memorable and bitchin' villain from "Hellboy II" and his eventual take over of the "Death Race" sequels has solidified him as a great cult star to follow. When "Interview With A Hitman" arrived on my doorstep featuring Luke Goss in a Bond-esque position with an old school stark white colored cover, I was ecstatic. Don't let his past films and roles fool you though, this latest underground picture brought to the mainstream by Well Go USA is not an actioner. It's quite the reserved and artful thriller mixed with just enough drama and character focused drive to keep it delightfully arthouse while retaining some of that intense atmosphere.

Viktor (Goss) has decided to spill his life story. He contacts a director to conduct an interview with him, so that he might tell his tale of growing up to become one of the best and most lethal hitmen you've never seen. Ffrom the streets of Europe to the cities of the US, his travels all seem to be leading him towards one thing...is it redemption for the life he has lived?

If you plan on checking out "Interview" (and for those who enjoy Luke Goss, I highly recommend it), then know two things going into it. First, it's not an action movie. It's a thriller. Second, it's a very subtle film that focuses on storytelling and character work for the payoff. I know this will lead to a slew of other reviewers screaming "it's boring" or "where's the action" and, to be honest, it's quite understandable. After the first half hour of an elongated sequence explaining how Viktor became involved with the mob in Bucharest as a child I was thinking the same damn thing. I didn't realize just how minimalistic that director/writer Perry Bhandal was going to keep it. It's very minimalistic. The dialogue is scarce, the score is very simple while being a driving force for the atmosphere of the picture, and even the multitude of characters require a bit effort from you to buy into their subtle performances. If you put in the effort though, it does pay off as the story twists and turns later on.

For "Interview" to work though, it truly relied on Luke Goss to carry it and I was shocked at how remarkably well he does. Although the darkness of the atmosphere and simplicity of the execution might be the highlight of the film, Goss certainly adds some unique layers to the character in his own ways. We know the guy can do action, and the few sequences of physical combat are well placed and strongly executed here, but his cold demeanor and strong eye work (the guy has a death stare to truly be frightened of) really do help. Sans the occasional thought that Goss might make a fantastic Agent 47 for the "Hitman" film series, he owns this role.

So why only a three and half blood drop rating at the bottom of the review? Well, "Interview With A Hitman" isn't without its flaws. Structurally the film can be a bit of a chore. Although I appreciate the old school mystery style that begins to boil to the surface in the latter half of the film, some of the aspects of the film are rushed or dragged out to make sure the audience keeps up. The childhood sequence feels too long at times (although pay attention because a lot of little details come back in the third act, so it does mostly pay off) and yet the pivotal romantic turning point of the film seems a bit rushed as it has to leap through months of time to get us to certain "highlights" that will punctuate the ending. Which also brings me to the 'twist' ending. Although I loved the basic idea behind the suddenly curving and quite fitting end to the film, it almost felt like it could have been built up more to why Viktor has chosen to do the interview to begin with, just so we are left with a bigger bang. I don't want to give too much away, but know that despite the length of the his story...a lot of it comes back in surprising and effective ways. Even if it could have been even more effective at times.

To recap, "Interview With A Hitman" is a strong suspense thriller for Luke Goss that brings his acting talents to the forefront. Director/writer Bhandal definitely executed a unique vision of what could have been a generic film and it pays off with some surprising twists that worked for me. It's a very slow burning film that could have used a slightly tweaked structure and pacing to help, but "Interview With A Hitman" worked on a multitude of levels that shocked even me.

I highly suggest picking up "Interview With A Hitman" for those with a more artistic taste in their thrillers. Lucky you, I have the links below so you can order your copy for its March 5, 2013 release from Well Go USA.