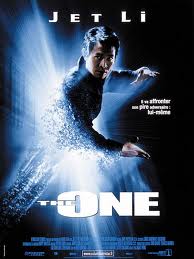 In a recent Jason Statham marathon, I decided to go back and watch the first movie I ever saw him in which so happened to be "The One" with Jet Li in the title role. As seemingly delectable as a film starring both Statham and Li is for action fans, "The One" tends to be a film caught in the purgatorial state between being an action film and a science fiction one. The genres have been successfully mixed before, but with "The One" the mixture is not cohesive and leaves a film that feels far too watered down and rushed that it ends up being more or less a "Matrix" clone with less brains and brawn.

Gabe Law (Li) seemingly has the life. A beautiful caring wife and a job as a police officer upholding justice that really allows him to utilize his martial arts skills. When a different version of himself called YuLaw (Li) shows up to kill him, he doesn't know if he is going crazy or not. YuLaw is from a different universe and has gone through all of the other universes to kill his other versions, creating a more powerful version of himself known as 'the one.' Now its up to Gabe and to Multiverse agents (Statham and Lindo) to stop his 'evil self' before he causes a catastrophe of epic proportions.

When I was first getting into martial arts films, I was only able to acquire American films that featured Jet Li and Jackie Chan at the time - and the 16 year old in me loved this movie. It's been years since I have revisited "The One" and upon my time with film as a 27 year old, I found it be a rather...well, crappy movie. On a popcorn flick kind of level, "The One" certainly entertains as it pumps up the action to the maximum level and utilizes Jet Li to some fun effect. The film caters to that early 00s action motif in style by throwing in enough 'bullet time' (and obvious cash in that most action films were doing since the release of the "Matrix" a couple years earlier) that it must have cost a fortune just to shoot. Ironically, despite its focus on gun fights, chases, and a needlessly complex plot - the highlight of the film is the Li vs Li fight at the end where classic choreography and some old school techniques (including having each character use a different martial art) make for a strong fight. Something that I'm sure was not the focus of the filmmakers.

So "The One" earns a few style points for some fun action, but beyond that this film drags on with its watered down 'logic' and poorly crafted script. Because the story requires so much explanation (with Multiverses, Multiverse police, the concept of 'the one', and of course the characters to make it work) that none of it feels deep enough to carry the film. The characters are quickly brushed over, the plot races at a lightning pace to fit in enough to make the action seem legit, and the oddly added in science fiction moments look cheap and often make one scratch their head including a rat grenade where the wire receiver hangs out of its ass...a definite WTF moment in the film.

"The One" is fun enough as it is, which is a popcorn flick, but its awkward blend of martial arts, action, and science fiction doesn't gel together enough to be thought provoking or intriguing. It's watered down for easy digestion and rarely rises above that. It's hard not to be somewhat disappointed as both a Jet Li and a Jason Statham fan with "The One." Could be worse though right?

The combination of Statham and Li is tough to pass up right? Same for me. Might as well pick up your copy at the links below too.