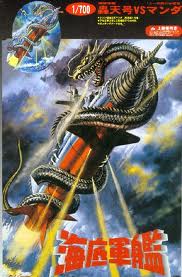 
What is more bad ass than a flying super sub with a freeze cannon and a fucking drill? Not much my friend and Toho proves yet again they were one of the master studios of science fiction in the 50s and 60s with their underwater adventure flick “Atragon”, a film that fans will be even more pleased about when they learn of its connection to the “Godzilla” franchise.

A race of human beings living underwater on a lost continent are angry for reasons unknown at their ashore counterparts. They declare war with their state-of-the-art submarine that can dive deeper than any other ever made… or so they think. The Japanese government needs a solution quick when they learn about a rouge World War II submarine commander that has spent the last 20 years of his life building a super sub but the problem lies that he believes the war isn’t over and will only use his weapon for the glory of Japan. Can his daughter and the Japanese government convince the war monger to use his super sub to save the world?

The imaginative storyline is based on a series of novels that no doubt takes inspiration from Jules Verne’s “Journey Under the Sea”. There’s a super sub, a ‘captain nemo’ stand-in and even a giant monster to shake things up a bit in the form of Manda. Manda is a giant sea dragon that the underwater race of humans worship as a god and though its screen time is limited, the memorable fight between it and the super sub Atragon is a moment Kaiju fans will eat up.

“Atragon” is a lot of campy fun from the Toho / Ishiro Honda success team-up. Fans of Japanese monster flicks might be a little disappointed in the little screen time allotted for Manda but this is not a Kaiju monster flick, but a science fiction adventure film that just happens to have a giant monster in it. The idea of the “Atragon” would become a pop culture icon in Japan with it and Manda later appearing in the “Godzilla” film “Godzilla: Final Wars” (Manda would also appear in the “Godzilla” entry “Destroy All Monsters”). The concept of Atragon would also be loosely remade as the Toho science fiction epic “The War in Space”.

Written By Eric Reifschneider﻿
Posted by Cronosmantas at 12:07 PM