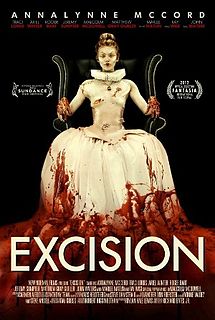 After numerous recommendations from trusted allies to the horror brood, I finally got around to seeing the much hyped "Excision." Word on the street was that the film was ultimately unsettling and often quite intense and these claims are certainly spot on. Although the film takes on a more subtle and psychological form of horror than say a true blue blood and guts style, "Excision" unnerved me in many ways particularly when it came the realistic ways that it cut out the 'life' of our leading young woman. What I didn't expect was how effective it would balance its intensity with extremely dark humor...and how spot on that worked here.

Pauline (McCord) is slightly off. Her life as a high school student has been anything but perfect as she sits as an outsider to the popular kids and her home life is not a dream either. In fact, her overbearing mother (Lords) rarely even tries to understand her while the focus of the parents is on her sick sister Grace (Winter). It's through her sister and her delusional fantasies about blood and surgery that she devises a plan to make herself known to the world, a plan that might be more than she bargained for.

It's relatively hard to capture a true synopsis of "Excision." The film plays out like an indie comedy that was doused in macabre and jacked on black humor, so it tends to play out like the 'slice of life' that I mentioned before. There is an artistic merit to the entire thing, particularly in how the plot progressions play out and the highly stylized horror dream sequences, and the film loves to play up the humor bits with a significant amount of dry humor and odd timing. This 'slice of life' style and the off beat humor make for a film that has moments of stunningly effective black humor that had me on the floor laughing.

Yet it's the impact of how disturbingly real the film felt that made it stick with me. The humor worked for me, but the counter balance to that humor was the horror of the film. It's not a traditional horror in most senses of the word. No supernatural serial killers. No monsters. No ghosts. The horror of "Excision" stems from the sense of reality that the film is built on. There are people out there with mental problems and social pressures (particularly young adults) where the problems go untreated and undiagnosed long enough to create some of the horrors displayed here. It felt almost too real at times. The thrown together cast, which does include some odd cameos from McDowell and Ray Wise, is so impressive that I was thrown off. Who knew Traci Lords could be as good as that and I definitely didn't expect McCord (who is known for her role on the new "90210") to be so unbelievably effective in the lead role. They add a sense of realism to the artistic direction and writing that really makes "Excision" hit hard with its disturbing horror traits.

The main problem that tends to derail the entire experience is the lack of urgency for the writing and plot. In a way, it falls prey to its own 'slice of life' style that made the disturbing elements so effective. Rarely was a sure where the film was going and after an hour I didn't see where the end game would be. It's not until about the last 15 minutes did the path of the film show itself and by then it was a little too late to rescue the unfocused vision of "Excision." It's a film that just wanders a bit too much getting to where it needed to be for the truth of the film to hit home and that portion undermines the entire thing a bit too much.

"Excision" made its mark on my psyche in how it superbly blended dark humor, real life grounded work, and horror elements into a ball of disturbing right hooks. It's a film that does lack focus and urgency to get us to truly jump into the ride with full investment, but the end result did itch under my skin...despite its obvious flaws. This is a film that comes highly recommended as a true example of artistic thoughtful horror and I suggest taking a gander at it as soon as possible...if only to get one to think about how we treat one another.