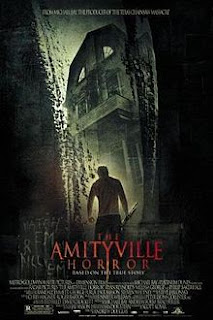 I have to admit that I'm with my brother when it comes to the original "Amityville Horror." Simply said, the damn this is often overrated for its own good. Not necessarily a bad or good film, but people's love for it seems overzealous. So when Michael Bay and company announced their intent to remake it, I wasn't all that heartbroken. In fact, it was a film that easily could use a new spin and a little more love when it comes to production values. The problem with this 2005 version of the classic "true" story is that it's not all that much better than the original one either. It has it's moments of stronger direction and cleaner (higher grade) horror, but it also tends to be a little underwhelming when it comes to depth and unique story arcs. "The Amityville Horror" just ends up being a solid film, instead of one to reach the legit heights that Bay's "Texas Chainsaw" remake saw.

The Lutz family is pieced together in many ways. Kathy (George) and her young kids have found solace in the loving arms of her new husband George (Reynolds) who plans to really take hold as a family man. That's why the couple decide to purchase their first house. A quaint place on the lake just outside of town. Turns out its a steal price wise too. Unfortunately, once they move in George begins acting strangely. He's more irritable and constantly seems on edge. And the more that Kathy looks into the history of the place, the more she begins to see similarities to the family that died their previously.

The first "Amityville" really did take the haunted house flick to interesting new levels. It has some classic sequences that have often been replicated and mocked. This remake at times does both, whilst adding on a more modern twist to make it unique. To some this is blasphemy, but as far as I'm concerned they needed to do both for this film to succeed in this day and age. And they did it whilst keeping it a 1970s period piece. So take it or leave it.

As for some of the new elements, you get some very modern ghost story things. Creepy things with extensive veiny make up, hands out of walls, and some fast editing of random things like blood spray, torture, and CGI monster men. In many ways, its these modern elements that add some flair to the already well worn story line. It also adds a lot of useless jump scares to the film that undermines some of the better subtle and atmospheric elements. The little girl Jodie seems to be a reoccurring ghost that has one great scare (with the babysitter in the closet), but seems significantly underused and irrelevant to the overall story. This is where "Amityville" simply tries to be too modern and often misses the target by throwing in too much useless back story and off topic scares.

One thing that really does work for me is the atmosphere of the film. Director Douglas does some great things with angles and shadows in the film and he really works the cast to their best. Reynolds seems to be (mostly) in top shape here and Melissa George owns as Kathy with her struggles against her slowly decaying husband. Even the kids, sans Billy who just comes off as cheesy, are impressive enough. At times, I wish that Douglas and the producers would have put more faith in the film's atmosphere and acting (giving Reynolds' his blood shot eyes to show his influenced state was overkill instead of the modern jump scares to add to its horrors.

All in all, this is a pretty decent "Amityville" tale that handedly incorporates its concepts and scares in modern form. Honestly, I enjoy this version more than the campy original even with its many flaws and quirks. I know that's blasphemy for any horror fan to say, but I really don't believe this version is all that bad. Yeah, its overkill sometimes on its modern scares and some oddball choices that don't embrace its solid qualities, but it is still a rather cohesive and strong narrative and some surprisingly impressive acting. I just might be the black sheep here, but I don't think this remake is all that bad.

Written By Matt Reifschneider
Do you agree with my final analysis? Perhaps you simply just need to see this remake for yourself. Well click the links below to score yourself a copy of "The Amityville Horror."
Posted by DarkReif
Email ThisBlogThis!Share to TwitterShare to FacebookShare to Pinterest
Labels: Horror