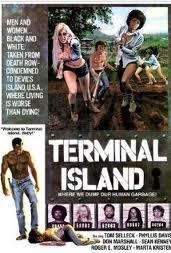 When going into “Terminal Island” I was expecting an earlier, lower budget, trashier exploitation version of “Escape from New York.” Not only did it deliver on those accounts but it was also a more professionally made example of its ilk and manages to even please fans outside of the trashy exploitation ring. 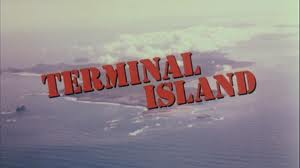 In the future capital punishment is now against the law. In its place criminals are exiled to a heavily guarded island where they are forced to fend for themselves in order to survival. A women recently sentenced to the island is forced against her will to provide physical labor, of the farming and sexual, kind to a sadistic self-proclaimed dictator (Sean Kenney). Being rescued by fellow prisoners, they band together with brains, bosoms and brawn to bring the psychotic “duke of terminal island” down.
Though it can be described as an action-adventure flick, “Terminal Island” at its heart is pure crass exploitation and takes full advantage to show boobies and extreme violence at every opportunity. What makes it rise above other films in the genre is that it actually takes time for character development and some good old fashioned action to appeal to general film fanatics.
The cast is extremely strong for this type of film, including early rolls for future Magnum P.I. costars Tom Selleck (as a doctor) and Roger E. Mosley. We are also graced with strong performances by Don Marshall, Sean Kenney and future “Vegas” star Phyllis Davis and director Stephanie Rothman handles her cast and low budget well, learning her trade from her earlier Roger Corman production “The Student Nurses.”
Though “Terminal Island” today is mostly known as an early exploitation film for future super star Tom Selleck, it is far better than that. Sure it's an exploitation film at heart but it still has enough other elements to please 70s film fans in general with interesting characters and numerous action sequences. I was thoroughly entertained by the film and any self-respecting drive-in cinema fan should be also. Multiple DVDs versions exist but only Code Red’s beautiful widescreen release is fully uncut.