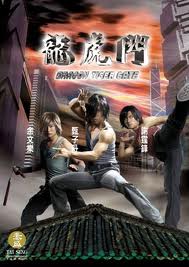 "Dragon Tiger Gate" is a film that on paper looks to be one to blow other modern kung fu films out of the water. Director Wilson Yip ("Ip Man" series, "Flashpoint", "Killzone") taking one of his favorite actors Donnie Yen (same films as above) partnered with Nicholas Tse and gunning them into an over the top comic book based kung fu film? Can I get a resounding fuck yeah?! The problem: even "Dragon Tiger Gate" can't live up to its own potential. The resulting film certainly lives up to its over the top comic book reputation, but the damn thing comes off as rather incohesive and often too cliche with its story.

The triads have been getting a bit vicious towards each other lately. It's even starting to effect a small justice focused martial arts school called Dragon Tiger Gate and their students. When Tiger (Nicholas Tse) and some of his friends end up on the wrong side of one of these disputes, he finds that his long lost half brother Dragon (Donnie Yen) is the personal bodyguard of the triad leader. With the help of a wandering martial artist Turbo (Shawn Yue) and the wisdom of their father Mast Wong (Yuen Wah), they will have to team up for the first time in years to defeat a vicious criminal Shibumi (Yu Kang) before getting on with their lives.

At first, I was loving the ridiculousness of the film. Just in the first 15 minutes or so, after a brief explanation of where we sit with the two brothers, the film gears straight into full on action. Both Nicholas Tse and Donnie Yen proceed to TEAR SHIT UP. It's non-stop as the two (and later on Shawn Yue) rampage through a slew of guards with high wire work, flying bodies, and generally kick so much ass that I was tired just watching it. With Donnie Yen's fight choreography, the film kicks off to an impressive start. I was even able to overlook the horrendous dubbing and ridiculous hair cuts. That's how awesome the first 15 to 20 minutes are.

Then the film takes a massive turn for the worse. I was initially hesitant about the films comic book like style and origins. And often those hesitations were justified as the film goes to some very cheesy fantasy elements in the latter half to create a more epic atmosphere. After the first series of fights, the film drags in the middle portion as we are given a lot of very cheesy and cliche family problems to contend with. Some ill fitting romantic subplots and the introduction to our villain which is half assed at best. The dubbing here ruins most any of the acting and the way that it plays out just kills any of the momentum established in the beginning. If it wasn't for some pretty sleek camera work from Wilson Yip and a strong artistic comic book look it would damn near be a tooth pulling experience here.

By the time it started building up towards our team attack on the superhuman villain, I was ready for it to kick back to where it started. Unfortunately, it never really gets there. By this time, there is a hefty fantasy/superhero style to the film. Mystical healers, a mask wearing villain of superhuman strength, and an anime style build pulled me out. When the final fight comes around, I was disinterested in the results and the ridiculousness of the fight was more fantasy than martial arts. It just didn't get up there to that next level for me.

I definitely can see why people enjoy this film. It's fun, cheesy, and the combination of Tse, Yen, and Yip is one of such a volatile nature its hard not to enjoy on some sort of fanboy level. Overall the film is just so damn inconsistent in its story telling and writing that no level of charm from these three individuals could override it. Mostly for curious fans, but I highly suggest many of the later films from these three masters of the genre than this one.

Big fan of Donnie Yen? Perhaps of Wilson Yip? Then you should probably own this film no matter what. That's why you should click below and pick up a copy for yourself. Maybe it will grow on you.