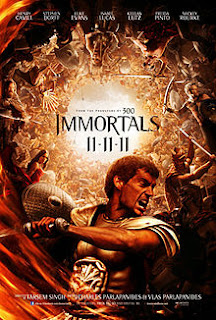 As a cult film reviewer, I get to watch my fair share of films that focus on style over substance and often enough there are film makers or whole genres that make a career at it. Just look at Zack Snyder. Films like "Sucker Punch" or "300" easily ooze out style, but beyond their slick look those films crumble under scrutiny. It's the latter film that is to blame for "Immortals" which essentially rips on the Snyder swords and sorcery flick by mixing it with some of the ideas that the remake of "Clash Of The Titans" used previously too. If you want, feel free to click on the hyperlinks to my reviews for both "300" and "Clash Of The Titans" to see how I feel about this style before continuing on. Needless to say, I was hoping for an entertaining flick out of "Immortals" but not much more. I barely got what I expected.

Theseus (Cavill) is somewhat of an outcast in his village spurned by his fatherless life. But an old man (Hurt) teaches him to be a strong and moral man, crafting his fighting skills and giving him a chance at a better future. When King Hyperion (Rourke) makes a very aggressive stance with his military to find the Epirus Bow and release the Titans on the Greek Gods, it is up to Theseus and a few friends to forge their way through the armies to stop Hyperion before his quest is complete.

Like the films that it rips off, "Immortals" focuses heavily on style and little on substance. It certainly tries to throw some moral things into the mix with its running themes of free will, revenge, and trust, but its so simplified in the characters and plot that rarely does it make an impact beyond being just another motivation for our characters to do the next sequence. The characters themselves are rather hollow too with far too many being introduced for any of them to have the kind of arc or growth needed for the film to feel like it has depth to its mystical journeys. The actors certainly try with the material that's given to them as both Cavill and Rourke desperately grasp to any little thing they can to make us feel good/bad for their respective roles, but overall the subplots, whether it be romantic, revenge, or the like, feel poorly built and watered down by a focus to cater to a larger audience. I was entertained when the film was playing, but minutes after it ended the imprint it could have left was already gone.

Who cares about plot and characters, right? I mean, it's "Immortals" so we want to see fighting! And monsters! And scantily clad women! This is a sword and sorcery flick so we demand it! This is where "Immortals" fails the worst. I expected the story to be overly complicated for its simple structure and I expected the plot to follow the dots. "Immortals" doesn't even really do the action portion well either. Yes, we have a lot of that Zack Snyder inspired slow motion brutality as men impale each other to CGI laden landscapes and we certainly get enough "monsters" here with a Minotaur battle and some God vs Titan throw downs at the end (were they even Titans?..what the hell were those things?). The problem remains that little of it is memorable. Even with Rourke eating up scenery in his ridiculous outfits as a very vicious villain, the whole good vs evil battle moments are too short and not unique enough. Director Tarsem Singh uses his music video style to its full benefit here, but the stunts and fights are just oddly choreographed and rather by the numbers. Not what I wanted at all from this film.

There are a few shiny moments of inspiration here, mostly with the casting, but in the end "Immortals" is a high budget knock off film that builds on nothing unique or inspirational to tell its brutal tale of men, Gods, and Titans. It's a by the numbers action affair with little depth and less motivation to be better than its predecessors. Only for those with a hard on for digital action and simple stories.

If you loved "Clash Of The Titans" or "300", then "Immortals" is a film you must have. So feel free to click on the links below to purchase your copy today!