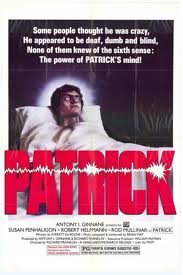 
Australia jumped on board the horror film bandwagon of the late 70’s and produced a slew of films to be distributed to drive-in theaters. Though most are forgotten a little film called “Patrick” was a modest hit and though a slow moving thriller, has enough scenes to make it memorable. Hell it worked on my mom as the ending was burned in her memory and thus she recommended it to me, her bastard horror film buff son. 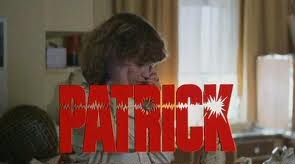 We open with Patrick brutally murdering his mother and lover in a bathtub (these psychos always have mommy issues) which somehow puts him into a braindead coma. Now we get introduced to a young nurse accepting a job at a hospital specializing with coma patients and becomes found of our bug-eyed Patrick. The kicker is that Patrick isn’t braindead and becomes obsessed with our young nurse and uses his psychic abilities to harm and kill anyone he becomes jealous with.
It’s hard to make an exciting film where our antagonist is in a comatose state and never leaves a bed but the filmmakers do the best they can to liven the film up with some interesting kills. Still the film falls victim to its motionless killer and tends to drag a bit and overstays its welcome a hair. As for most of the victims director Richard Franklin does his best to make  most of them absolutely despicable. Seriously he loads this film up with cunts and assholes to help the audience cheer on Patrick to bury them all 6 feet under. If I lived in a world where everyone was this mean and cruel then I would just eat the end of a shotgun barrel and call it good.
They fella they picked to play Patrick was perfect. This guy’s eyes will star deep into your soul and shit in your heart. For a character that doesn’t do much, Robert Thompson sure made him memorable. Hell his hilarious spitting and unibrow will make you cream your pants. But it’s his eyes…. HIS EYES that will burn their way into the bowels of your mind forever. I also loved our lead actress Susan Penhaligon , whom I had previously seen in the British horror film “House of Mortal Sin”. She’s just cute as a button and all the characters in the film tend to agree as both her ex-husband, a doctor and our title coma patient seem to stop at anything to get her.
By today’s standards “Patrick” may be a little tame and the plot is rather slow moving. However the good acting and solid directing keeps the film trucking along and there are enough memorable scenes (including a jump scare ending) to make it worth watching. Audiences tended to agree and Patrick proved to be very successful in Europe, so much so that an unofficial Italian sequel titled “Patrick Still Lives” got made. That film has a completely interesting background all its own…