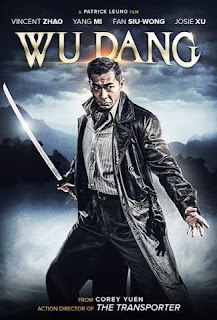 Going into "Wu Dang" I was determined to keep an open mind. Never to be one who loves fantasy elements in their martial arts and having the film be directed by the guy that gave us "Blade Of Kings" (aka "Twins Effect 2"), I knew that I was going to have to let my cynicism slide. Keep an open mind. Just run with it. Much to my surprise, the fantasy elements are actually subdued in the film, until the finale that is, and the film contains enough heart to override many of its over the top elements and story progressions. It may not be a perfect film in a lot of ways, but it's certainly entertaining and fun.

When a father (Vincent Zhao) and daughter (Jiao Xu) decide to enter a massive martial arts tournament on Wu Dang mountain, none of the other contestants know that the father's real plan is to use a map to steal seven treasures hidden throughout the area. What he doesn't know is that a fellow contestant (Mi Yang) is also there to steal one of the treasures that rightfully belongs to her family. Now the two must partner up to survive an onslaught of guardian students and put together a fast treasure hunt before they are discovered and forced to leave.

Initially, "Wu Dang" has a few things going for it. Its cast is pretty impressive. Featuring some very impressive new martial artists in its ranks, this film really piles on some charming and fun performances/characters to keep the audience intrigued. The script rarely gives them a whole lot to work with instead catering to a ton of smaller characters with limited growth instead of giving strong arcs to a few main ones. Poor Siu-Wong Fan somewhat gets the shaft as a villager with a big heart and some sort of special "sleeping kung fu" ability which gets brushed to the side in the last act. Yet, the chemistry between Vincent Zhao and Mi Yang is pretty fun and impressive - culminating in a very memorable "dancing" fight sequence in a library. Despite its scripting flaws, it's hard not to fall in love with the quirky characters.

This leads me to the second reason that "Wu Dang" is worth the purchase. The fight choreography is from the elite Corey Yuen. Even non martial arts fans should know the name as he has done plenty of action films like "The Transporter" series or Jet Li's fight sequences in "The Expendables." His high flying wire work and clever use of sets/props is always a delight to see and "Wu Dang" is no different. Wicked weapon use, plenty of exploding walls, and flurries of feet and fists make this film a rather enjoyable experience on an action side. Partnered with some of the visual flair of director Patrick Leung and the fights here are impressive and well staged.

The biggest obstacles that "Wu Dang" must overcome is how the script develops and the finale that it culminates in. Although I was willing to overlook most of its cheesy lines and awkward character developments,  "Wu Dang" does have too many issues with its writing to fully be written off by its 'fantasy' moments. And those fantasy moments certainly add in a layer of ridiculousness to the finale when glowing people and magical marbles start taking hold of the film and push the character growth to the back burner. I was expecting this though so it didn't come as quite the shock as it could have and I was able to have fun with it.

There are two elements that make "Wu Dang" worth if for those of the martial arts ilk with its choreography and strong cast. The film definitely has its shortcomings in its often too cheesy script, oddly developed characters, and really out of place CGI, but it's still an entertaining ride that layers on the ridiculousness as it moves forward. Fans of the fantasy martial arts film will find plenty to love in its goofy moments and strong fighting, but if you are looking for more realistic films...then "Wu Dang" is more of a rental.

If you are looking for that fantasy ride into ass kicking, then you probably should just go ahead and click on the links below to order "Wu Dang" for its December 4th release date.