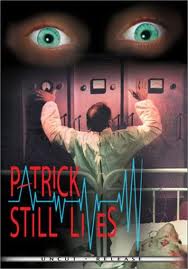 
The 1978 Australian produced horror film “Patrick” was a modest hit around the world, especially in the continent of Europe. The Italians, the masters of rip-offs and unofficial sequels that they are, decided to cash in thus produced this poorly constructed follow-up. It’s from the makers of the zombie trashfest “Burial Ground” so we know this is going to be one sleazy and contemptible time.

Despite the title, the original character Patrick does not return thus does not ‘still live’. We get completely different guy as a completely different coma victim. How did he come to be in a coma you ask? Well someone threw object out their car window hitting him in the face in a thigh slappingly silly scene. A mad doctor finds out that our Patrick stand-in has psychic abilities and invites some of his enemies to his hospital for Patrick to dispose of in all sorts of grisly ways. When ‘Patrick’ isn’t killing and causing people to see his floating eyes, he’s busy raping the sexy receptionist.
Everyone behind this lame film is a complete hack – as in a capital H.A.C.K. They take the basic premises of the original and load up on the gore and nudity. Seriously the uncut version of the film borderlines on pornographic when it comes to amounts of skin. The kills are also especially grisly, namely a scene where a women gets skewered through the vagina and out her mouth with a floating metal rod. Damn Patrick has a disgusting mind!
In the midst of the graphic violence and nudity, director Mario Landi creates plenty of unintentional laughs with odd color lighting and hokey effects. Seeing eyes floating around the hospital is especially laughable. The guy he casted as our ‘Patrick’ stand-in also fails to make an impression. He apparently is a popular Italian pop star but he lacks the hypnotic and terrifying eyes of the original guy that could wring out your soul
“Patrick Still Lives” is the eurotrash version of its Australian counterpart with schlocky filmmakers loading up on gore, sex and nudity to make a quick buck. It’s just a cheesy and all around poorly made film. Does that mean it’s not worth a watch? Hell no as there is an audience for unintentional funny sleaze like this. It just wasn’t made for people who loved the original film thus they miss their target audience they were trying to attract. Plain and simple people who loved “Patrick” are going ot hate “Patrick Still Lives” and vice versa. Even Richard Franklin, director of the original film, was disgusted by this cash-in. That my friend makes it worth at least a watch in my book.