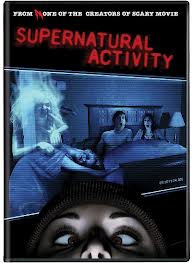 Spoof films are a dime a dozen any more. Cheap to make. Easy to write. Simple to sell. They just riff on the success of various other films and genres to make it work. The problem is that these films might be easy to sell and make, but they are hard to get right. Occasionally one of these films do come out to surprise with their effectiveness. That would be where "Supernatural Activity" comes into play. A spoof on "found footage" horror (both film and TV), this little indie comedy smacks easily of classic Steve Oedekerk material in how it plays on its own ridiculousness. That does mean it's not for everyone, but it certainly took me by surprise.

A very popular supernatural ghost hunting program is planning their farewell show. So they decide to head out to a rural house to investigate the mysterious Smallsquatch to verify its existence. The shows host and creative force Damon (Pozza), freely admits to the all of it being staged and decides to film how he does it. So his team splits into two groups, one will investigate the "demon" in the house and the other will trek through the woods to find traces of the demon's existence. Will they find the real thing or is the gimmick become something of a joke on them?

This film is very outrageous. I mean, it really takes itself to some awkward places. It still remains within it's concept - it doesn't jump genres like the later "Scary Movie"s did - but it isn't afraid to do some wacky things. It throws in a lot of different films to knock on including "Paranormal Activity", "The Last Exorcism", "Blair Witch Project" and even the TV show "Ghost Hunters." Ironically, it does it with relatively fresh ideas using both quick dialogue and slapstick humor to really pick apart the found footage horror genre. For example, the camera man at one point pukes because he's shaking the camera too much or our fearless host explains how to pile rocks in the way witches would have done with the help of a little girl.

Our host Damon really adds to it too. The before mentioned Steve Oedekerk reference comes into full play here as Pozza really runs with the character both in his complete seriousness and the physical comedy he uses. He owns many of the funniest moments and his physical humor is spot on for the film.

That being said, the film does have its fair amount of cliche spoof moments that don't really work either. Some of the supporting cast is just silly and they try too hard to be funny (which make them not funny) and some of the knock off moments are too forced too. The "Blair Witch" moments are rarely funny, sans the pile of rocks moment which had me on the floor, and some of the jokes are taken too far. The "Paranormal Activity" standing as time flies by starts off hilarious and then just takes way too long to play out.

"Supernatural Activity" was a surprisingly funny spoof affair, but even then it's a rather hit or miss film. When the film is on a roll with the jokes and humor, it's tremendously funny. When it's off, it's achingly off the mark. For those looking for a solid way to waste some time or looking for a film that mocks found footage horror in some really clever ways - I suggest a watch of "Supernatural Activity." If spoof films are not your thing though, then this won't change your mind.

Spoof films your thing? Perhaps you are looking for a film to finally point out the mediocrity and silliness of "found footage horror?" Then click the link below for your copy of "Supernatural Activity" right now!