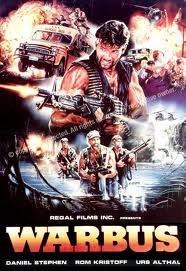 
After reviewing “Warbus II” I was eager to locate a copy of the original film to see how it compared. I despise viewing sequels without prior viewing of the original film as it gives me no basis to compare the two. Sadly being a fan of Euro cult films this happens quite often. Low and bold one day while rummaging through a bargain bin my eyes fell upon a 10 film set featuring trashy Vietnam war flicks from Italy and/or the Philippines and one of the films was “Warbus”. No matter how bad the transfer one can’t go wrong for $5 bucks for this trashy goodness and this trash smelled, and tasted, wonderful. 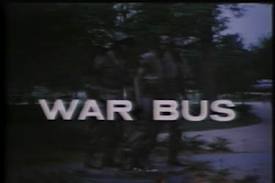 In Vietnam and group of civilians and a captured officer are traveling by school bus to get to safety when they are high jacked by some American Soldiers. The soldiers need to the bus to complete a mission and to get to an abandoned command post to contact authities and get rescued. The Vietcong get word of their transmission and are waiting for our rag tag group and a bloody and explosion filled brawl ensues.
﻿
﻿Like expected the plot is null. Remember this is the time of “Rambo” so explosions and body count is all one needed to be an entertaining movie. “Warbus” delivers on this standpoint as I lost count how many bullets were fired. What “Warbus” lacks is a solid hero as our lead isn’t fit to carry Rambo’s ammo belt. This lack of a good hero makes the film fad from memory fast in the barrage of bullets and debris flying at the screen.
Compared to its sequel, “Warbus” makes a little more sense as at least this bus isn’t expected to survive firepower from tanks and helicopters. Still I can’t say that I enjoyed it more. They are both Euro trash wonders to behold and definitely two of the more watchable entries into the late 80s Macaroni Combat cycle. The VHS transfer in the “Mercs” set by VideoAsia is watchable but barely. The picture even drops out and rolls for about a minute straight. Still it’s better than paying high price for a beat-up ex-rental video tape and transferring it to DVD yourself. For a 10 film set that cost 5 bucks that means “Warbus” cost me a whole half dollar… and I definitely got my 50 cents worth.

Own "Warbus" with buying the set below
Posted by Cronosmantas
Email ThisBlogThis!Share to TwitterShare to FacebookShare to Pinterest
Labels: Action / Adventure, Macaroni Combat, Western / War