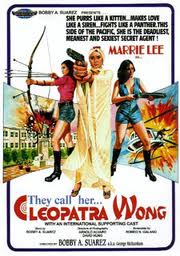 THEY CALL HER... CLEOPATRA WONG


"She purrs like a kitten, makes love like a siren. This side of the Pacific, she's the meanest, deadliest, and sexiest secret agent" – Tagline

What do you get when you mix Hong Kong martial arts, James Bond and a pinch of 70’s Blaxploitation? You get a hellacous concoction known as Cleopatra Jones, an entertaining yet poorly made Filopino exploitation film that jumpstarted the career of  star Doris Young (under her stage name Marrie Lee) and paving the way for two sequels. 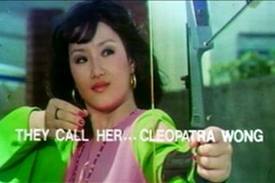 Cleo Wong is a the world’s best Interpol secret agent and when she’s not busy training or fucking, she’s beating the world’s most diabolical criminals. IN the middle of a love making session, Cleo gets a phone call to stop a counterfeiting ring whose goal is the destabilization of currencies of all southeastern Asian countries. With the help of her martial arts “abilities”, gadgets and sexy looks she infiltrates a catholic church and kills a shit ton of Uzi totting nuns.
Counterfeiting does not sound as provocative as a James Bond plot of a diabolical madman “trying to take over the world” but for a cheesy Filipino exploitation film it will do just fine. The plot is only used to loosely tie together hilarious martial arts sequences. Star Marrie Lee (a stage name created to make a connection to Bruce Lee) obviously had no previous martial arts experience and it shows, as she is TERRIBLE when it comes to fight sequences. Her awful martial arts abilities makes the fight sequences all that more hilarious, especially when she beats three wrestlers single handedly and then leaps over a ten foot wall.
“They Call Her... Cleopatra Wong” is a poorly made espionage exploitation martial arts flick, but like most films that were shit out by the Philippines it totally entertains despite itself. Marrie Lee’s inept martial arts capabilities, hilarious dialogue and absurd situations (I seriously never thought I would see so many men dressed nuns get blown away) makes this a must see for trash connoisseurs. Impossible to locate on home video for years and years, “They Call Her.. Cleopatra Wong” was released in a double feature with “The One-Armed Executioner” thanks to Dark Sky Films. Out of its two sequels, “Devils Three” and “The Return of Bionic Boy” (huh?!), “Devils Three” finally got a DVD release thanks to Code Red.