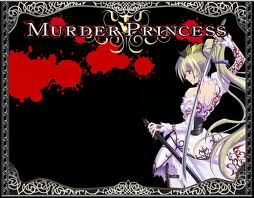 Finally I was actually able to sit down and review an actual Horror themed anime series. Yay! Sadly this series was not as horror themed as I had initially thought. However, I saddled up and rode through this little ghost town and watched the series to completion. Only 6 episodes long or ovas long if you prefer, it was rather short. Not sure why either. (back to this later on ) Well enough about that now on to the review.

Story - In this series you have a kingdom under siege , a dying king, and a princess not quite strong enough to be the leader of her people. Mix in a rebel bounty hunter and her gang of not so merry men (think son of Frankenstein and a strange Tiki looking dude) as well as a crazy mad scientist as the redundant villain and you got yourself a half-assed story that leaves you wondering what could have been.

While sitting around the castle one day Princess Alita has to watch her father die from his war injuries. Not sure if her brother is still alive or not due to lack of communication from the front lines, she is forced to leave the castle before it is over taken, since she is the last of the bloodline. Within a matter of moments she is lost and alone running for her life from some giant monster that wants to eat her. As she is running through the forest she some how manages to run over the bounty hunter Falis, sending them both over a cliff to their doom or so we thought. Apparently when two souls are put into a traumatic situation they can switch bodies which is exactly what happens next. The absurdities mount as this story continues. Somehow the Princess convinces the bounty hunter who is now in the body of the Princess to go back to the castle with all her ass kicking skills and save the kingdom. She of course agrees and the adventure starts.

If action is your thing then this series has you covered. Lots of action, with some pretty awesome battle scenes. Not a whole lot of substance but with a title like "Murder Princess" what can one really expect. I struggled to take the series seriously as I do not the think it can be. With the plot and characters it is pretty much a bash em type anime. What I mean is that it is like the old fighting video games where you just push a bunch of buttons and you might win. 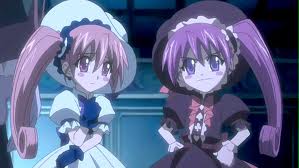 These two twins are a shining example of the kind of villains the Princess must try to stop. She also faces off against werewolves and sorcery. On one side you have potential for a really good story and then the other side is 'lets keep it simple and goofy'. I feel like the writer was not sure what direction to take this series. With that in mind I feel like we, the viewer, got short changed. This is such a short series that we are left with a lot of plot holes and ultimately it does wrap up the story in its own way.

Artwork- Nothing flashy or new. It is pretty standard for anime these days. I liked the colors used during the action scenes. I think the forest was done well with the intent to add a horror feel to the project. 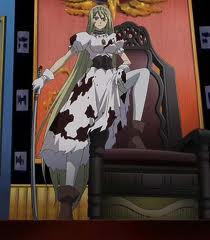 Music - Soundtrack was very good. With a hard rock intro it really set the mood for the series. Fast paced and out of control.

Voice acting - Admittedly I watched the dubbed version, as I have become more and more interested in dubs. I feel like Funimation made some great choices with the roles. Other than the whiny annoying voices of the little robot children. I have nothing but praise in this area.

Overall- Turn off your logic, grab your favorite snack and sit back and watch the blood bath commence. While I do not think this is for everyone I do think if you like lots of action and violence then this is for you. Lots of blood shed, very little fan service, and not much of a story. Until next time , keep watching anime amigos!!

You know you want to watch "Murder Princess" now...so you might as well take that mouse there and click below to purchase it. Or perhaps purchase one of John's other suggested titles.