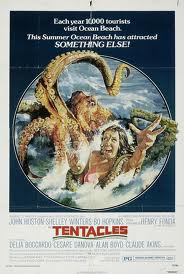 
Still living the high life off the profits he made with his blatant “Exorcist” rip-off “Beyond the Door”, Italian producer/director Ovidio de Assonitis saw another golden opportunity to make some quick cash when Steven Spielberg’s “Jaws” chomped its way through all the box office records. So he quickly slapped together a script, signed some fading Hollywood stars in need for some dough and set out to make yet another cheap-jack poorly structured Italian knock-off.

The plot is essentially the same as “Jaws” only substituting the giant shark with a giant octopus (or squid as some actors incorrectly call it). In a small coastal community corpses start emerging with all the flesh suckled off the bones. A journalist (John Houston) suspects a local controversial drilling operation holds the key to the deaths but soon the town has to turn to a famed oceanographer (Bo Hopkins) as he discovers a underwater monster is responsible.

The whole plot is a complete mess as Ovidio seems more concerned with loading the screen up with famous actors as opposed to characters the audience can follow. The film starts off as if it’s going to follow the journalist character but halfway through the film shifts gears focusing on the oceanographer with the journalist barely making an appearance. The subplot with Shelly Winters and her son is nothing more than pointless padding and don’t even get me started on the Henry Fonda corporate conspiracy subplot that absolutely goes nowhere.

The special effects can be fair at some moments but overall they are quite laughable, especially with poor minitures and obvious killer whale sock puppets attacking the sea beast at the end. Still the unintentional laugher due to the effects can hold attention over the dull and poorly paced plot structure that jumps all over the place only loosly tied tighter by a silly electronic soundtrack trying desperately to emulate John Williams legendary “Jaws” theme.

There are some enjoyable “Jaws” knock-offs out there, especially Joe Dante’s “Piranha”, but “Tentacles” isn’t one of them. The polished production values and high caliber cast are only a façade to mask its true incompetent nature. It’s good for a few laughes but poor plot structure, padding, character arcs, and overall lack of bloodshed makes this a trying experience for even the most forgiving of Eurotrash fans.