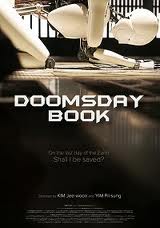 South Korea has been home to some of the greatest genre film works in the last ten years. One genre that is still on the fringe of being dominated by the ambitious film makers of this country is science fiction. The directing duo of Kim Ji-woon and Yim Pil-sung are here to set the record straight with an ambitious anthology film that analyzes the end of the world. "Doomsday Book" is a solid science fiction romp that between its three stories will have you laughing, thinking, and (oddly enough for a film about the end of the world) feeling somewhat optimistic about the whole thing.

Three stories intertwine about the end of the world. In one, a awkward young man is given the task of cleaning out the family garbage and what he throws away starts a viral plague that brings the world to a walking dead end. In the second, the world as we know it finds itself shaken when a normal tourist robot becomes enlightened and finds himself in the cross hairs of the paranoid company that built him. Finally, our last story unveils as a strange meteor is about to collide with Earth. A young family looks to survive it in their underground bunker, but their daughter makes a drastic discovery...that the meteor just might be her fault.

With both of Yim Pil-sung's segments (the first one "The Brave New World" and the last one "Happy Birthday"), the style is laid on very thick. He piles on some significant amounts of dark comedy and societal commentary into his entries that works at times (the news reporters in both portions are hilariously off beat), but often enough despite his flair for visuals and some strong performances his entries lack a little bit of the depth that they needed to really work as well as they could have. Both are extremely fun and off kilter with the zombie apocalypse portion hinting on some great horror moments and "Happy Birthday" coming off with a bit of that 80s charm to its oddities.

What makes them seem sub par even with their fun and quirky stories is the fact that Kim Ji-woon's segment "Heavenly Creature" is damn near perfect. It's a unique take on the end of the world theme as its not a 'end of the world' so much as it is 'an end to the world as we know it.' The idea that an inanimate object of our creation becomes enlightened to true spiritual paths while the human race struggles continuously makes for some Asimov inspired discussion and Kim Ji-woon's script quickly takes to it with little time to spare. It moves like a laser, despite a lack of extraordinary events, and its impression is left on the viewer for long after it ends. The dialogue is brilliantly written, the performances should be award winning, and its subtle commentaries on human condition shoot this short film right up there with the likes of "Blade Runner" or "2001." I know that's a hell of a statement to be made and I am willing to stand by it for this segment.

As a whole, "Doomday Book" might be uneven in how it presents itself, missing out on some opportunities to really go the distance with its nuances of humor, horror, and depth of character work, but it was still a damn fine viewing experience. It was hilarious at times, deep in its thought, and expertly crafted visually. The performances were all top notch and both directors brought their A-game to their tales. Any self respecting science fiction fan owes it to themselves to own the film even if it's just for one segment.

If "Doomsday Book" sounds like your kind of read, then you definitely should throw some support out and pre-order the film for its December 11th release in the US. The links below will take you to the place you need to go!