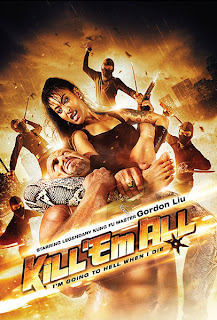 Bad movies are a dime a dozen and one's ability to enjoy them is enhanced by the "mood" they are in when they watch them. I must have been in the right mood when I threw in "Kill 'Em All" because this low budget martial arts actioner was just what the doctor ordered. I knew it was bad with its questionable writing and less than reliable acting, but I will be damned if I didn't enjoy the shit out of it with its focus on fighting and over the top moments. "Kill 'Em All" is definitely not a film for everyone as it caters to that low budget audience, but for those who are interested then I highly recommend it.

A slew of the world's best assassins have been kidnapped and placed into a dingy room. These assassins have no idea what is happening or why they were chosen, but a disembodied voice tells them that they have been placed into The Killing Chamber and will be forced to fight one another to the death. As time progresses and the body count rises, the trained killers desperately try to build a plan to escape and punish the man behind all the madness.

Often enough, "Kill 'Em All" feels like a movie based on a video game. So much, in fact, one of the characters even makes a comment about how it feels like a video game. The first portion of the film builds in a "fighting game" style as we have a slew of different style assassins having to fight one another to earn their next round and some weapon prizes. The film desperately tries to build some tension with brief back stories on a few of the more important lead characters, but some very hit or miss acting makes it feel a bit too silly for its own good. Director Raimund Huber adds in enough flair with camera work to keep this portion interesting, but it's the choreography and charm of the fight sequences (despite their initial simplicity) that keeps your attention.

Then the film takes a twist for the better and shakes off its "fighting game" mode and goes into "beat em up mode." Like the great beat em up games of the past like "Double Dragon," "Kill 'Em All" kicks into that ideology by having our remaining 'heroes' run around a dilapidated warehouse just kicking the crap out of an endless supply of gang like fighters, working their way up through "bosses" and eventually to the villain who is played with pretty impressive charm by Gordon Liu. The fighting is top notch though and the choreography by Tim Man towards the end of the film is impressive to say the least. It's by the numbers in its narrative, but lightning pacing helps and for action fans the last half is a blast.

The limited budget hurts it occasionally (the guns look cheap with their shooting and the one explosion is damn near hilariously simple) and despite its relatively star studded underground action cast, the film struggles with its script and getting us to really care about the characters. Yet, those can be easily overlooked by the strong choreography and strong sense of relentless fun that "Kill 'Em All" carries. It's a bad movie, but its so damn good at being a bad movie that I had a blast watching it. Highly recommended for fans of B-grade action films!

Don't let the rating fool you, you know whether or not this movie is for you. So you might as well make sure you pre-order your copy for its December 11th release in the US. The links below will lead you to your destiny.