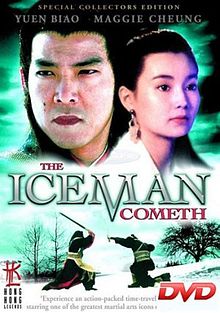 As of now, the late 80s and early 90s are somewhat of a missing era for kung fu films and Hong Kong action. While companies focus on newer material and classic material, this era becomes one that is heavily overlooked by distribution companies. Which is somewhat of a sad thing as films like "The Iceman Cometh" are genre classics that one has to settle for mediocre to shitty copies for viewing. This is how I was able to see this humorous action/fantasy myself... through a very sketchy copy that I was able to score on Netflix. Despite the fact that "Iceman Cometh" desperately needs a remastering, the film is a fun and quirky modern take on a classic kung fu style even if some of the humor is hit or miss.

Fang Shou Zheng (Yuen Biao) is a royal guard for the Ming Dynasty. When a fellow guard Feng San (Yuen Wah) goes on a rampage raping, killing, and trying to ignite a mystical device, Fang Shou Zheng sets out to stop him. Unfortunately, they are both frozen in a glacier mid battle. Fast forward to the 1980s where the two are being transported as artifacts and an accident melts them free. Now the rivalry will be brought to modern time as Fang Shou Zheng must rely on the help of a quirky prostitute (Maggie Cheung) to stop Feng San once and for all.

This is not an original concept. Awkward person out of their element but determined to make it work? Damn. I'm pretty sure "Encino Man" even used this not too long after this. So it's a concept that we've seen a ton of times. The difference between "Iceman Cometh" and those other films? This film has massive amounts of 80s style Hong Kong kung fu comedy tomfoolery. It's often quite silly, still beats with a heart of gold in its romantic subplot, and earns some solid points for its awesome stunt fights.

The humor can be slightly hit or miss. Like many of the action/kung fu films from China in the 80s it relies heavily on slapstick humor and some toilet humor to work. Most of it works in some pretty cliche ways (learning what modern technology is for example or learning how a toilet works), but occasionally it falls flat. The same goes with its romantic subplot. It tends to run a little by the numbers for me and rarely deviates from predictable.

Yet, these flaws are fairly minute within the whole that is "Iceman Cometh." The film really cakes on the charm with almost ferocious effect perfectly utilizing its cast where its need. Yuen Biao is delightfully charming and relatable as our loyal hero in a strange world, Maggie Cheung steals the film with her large character arc and quirky humor, and Yuen Wah eats up the screen with his conniving villain that would be fitting fighting Dudley Doright as much as Fang Shou Zheng. Partner this with some fantastic fight sequences (including a more than classic finale of high kicking high tops) and some oddball fantasy elements and "Iceman Cometh" earns a lot of merit just for being a damn fun time.

Although "Iceman Cometh" might have its flaws as a film (and a horrid US release), it easily overcomes those cliche story elements and off kilter humor to provide a fun and humorous action time. For that I give it the benefit of the doubt on many things. It might be goofy at times, but if you are willing to run with it then this film is a blast. Highly suggested.

Written By Matt Reifschneider
Think "The Iceman Cometh" might be for you? Then thaw out your butt and purchase it at the links below!
Posted by DarkReif
Email ThisBlogThis!Share to TwitterShare to FacebookShare to Pinterest
Labels: Action / Adventure, Comedy, Fantasy, Martial Arts