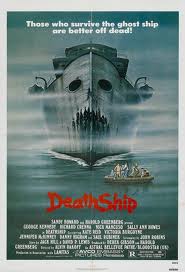 
Film buffs of a certain age range probably remember the wonderfully eerie box artwork to the obscure Candadian Nazi ghost film “Death Ship” lurking on a shelf at their old mom-and-pop video store. This artwork burned its way into my memory and for years I have been dying to hunt a copy down. More recent horror flicks like “Ghost Ship” that blatantly ripped off the poster artwork and even storyline only wetted my appetite to lay my eyes upon this highly sought after Candadian “classic”. Thanks to Scorpion Releasing, one of the leaders in unleashing highly sought after cult classics on DVD and Blu-Ray, I finally have it in my hands and able to see if the film lives up to its amazing poster artwork. 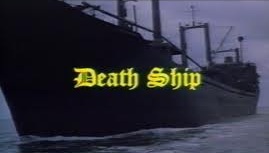 The film opens with a luxury cruise liner packed to the brim with rich snobs getting rammed by a ghostly black vessel in the middle of the ocean (though all the sediment in the water proves it was close to the shore). After the vessel sinks only eight people remain alive and are forced to take refuge on the ghastly ship that is ominously overlooking their life raft. It doesn’t take long for them to discover that the old ship is completely deserted yet it seemingly runs by itself. To top it off a series of bizarre events start occur as if the ship wants its new crew to stay with it forever… and ever… and ever. 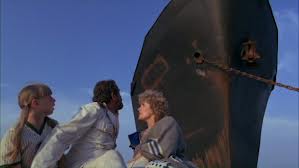 The plot is simple yet increasingly warped, very “Twlight Zone”-ish in its approach. As the film moves along it gets increasingly unsettling and grisly before coming to a climax that is literally, head on. Most of the film takes place on the rickety vessel and it is an unpleasant setting that feeds the ghostly atmosphere wonderfully. Director Alvin Rakoff, a new-comer to the horror genre, handles the genre well with his raw style utilizing hand held cameras and odd angles to add some well needed manic feel to the situation (especially during a memorable sequence involving a shower of blood). 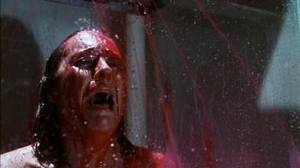 The slow pacing of the plot however kills many of the scares. Lots of shots of pistons pumping in the engine room aren’t scary; no matter how many times the filmmakers decide to show them in order to pad out the running time. Thankfully the film does eventually build up to an interesting reveal of what went on upon the vessel so many decades before. The film’s obvious low budget shows its flaws when it comes to the ship crashes (consisting of off-putting editing mixed with stock footage) and some silted dialogue. I also was annoyed by the ghostly German voice speaking orders to George Kennedy but thanks to no subtitles the audience has no idea what the ghost is saying (though a special feature on the recent DVD release does reveal this). 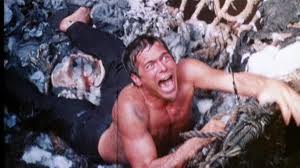 “Death Ship” has had a dire reputation over the years but it doesn’t deserve such a bad rap. Sure it has plenty of flaws but for a “haunted house on the ocean” plot it’s not bad at all. The frenetic direction, professional cast (including the Marlon Brando’s of B-movies Richard Crenna and George Kennedy) and dreadlike atmosphere makes “Death Ship” well worth seeing for horror nuts. A special thanks goes out to Scorpion Releasing for making this lost “classic” available for the first time in America on DVD and Blu-ray.