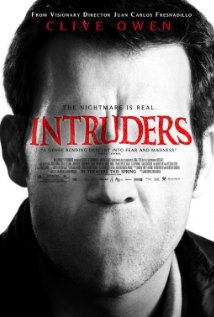 It's usually bad news bears when a film gets kicked from its theatrical release to home video in record setting time. I was stoked about "Intruders" after seeing its initial trailer, but somehow missed it when it came to theaters here (*Note: turns out it only opened in 33 theaters...) and had to wait for its eventual home release - which wasn't too long after. Upon gandering at the psychological thriller/horror film featuring the very underrated Clive Owen, my mixed feelings kept me from writing this review for quite some time. Not particularly because the film was hard to digest, but it was hard for me to dignify my feelings about it. On one hand it's a dramatically executed film with some strong visual direction and some very impressive acting all around. On the other hand, the film tends to be too ambiguous with its plot in the latter half and it comes off a very predictable. Two sides that could lend to a review that leans either way.

After a family man (Owen) working a high stress job doing high rise construction barely saves one of his coworkers from a drastic fall, he finds that his daughter (Purnell) is suffering from vicious nightmares of a cloaked man called Hollowface trying to steal her face. Elsewhere, a young boy (Corchero) and his single mother are fighting the same kind of demon whilst looking for a spiritual reason to the hauntings. Could the two accounts possibly be connected and how will the parents of these children possibly overcome something from imagination?

As I like to do with my reviews, let's cater to the positives of "Intruders" first. The cast is stunning. Clive Owen still retains a bit of that underground status by doing a Spanish horror/thriller whilst continuing to deliver some strong performances. Even better is some of the supporting cast, including Purnell who delivers some heart wrenching moments as a tormented daughter desperately seeking safety in her family. The entire cast delivers though and the direction of Juan Carlos Fresnadillo only adds to their impact. His stylistic atmosphere and ability to build the tension of a dark corner and oddly lit ally is impeccable here and he shows off why his artistic ability to add depth to horror films makes him a director to watch. The film has a great look to it with surprisingly high production values and the scares can be pretty potent.

The problems that "Intruders" has to overcome mostly reside in how the film itself plays out. There are two intertwining stories of two Hollowface encounters, but their connection was instantly obvious to me (I have spoken to folks that didn't see the twist of the film coming as easily - so perhaps it was just one of those days where I was firing on all cylinders beyond my normal capacity) and without the impact of the that revelation the film lost a lot of steam after its strong out of the gate sprint. This is only made muddier by a rather confusing ending where the lines of reality, dream, and horror are blurred to a point where I ceased to worry about our characters well being and was trying to figure out just what the hell was going on. As it would happen, a well executed film fall prey to its own cliche elements and oddly anticlimactic ending which just simply derails the whole film.

I do admit that despite my issues with its script and functionality as a horror/thriller, "Intruders" wasn't a half bad film. The execution from Fresnadillo was top notch as were the performances and some of the cleverly shadowed CGI. It was an entertaining film and one that I would recommend for a solid watch, but not one that should have been a must see or must buy for genre fans.

If you love psychological thrillers, than "Intruders" will be right up your ally...a dark, oddly lit, shadow filled ally. So you should click the links below and get your copy today!