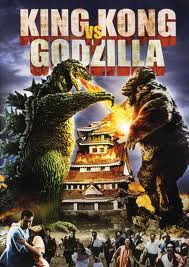 
What seems an eon ago, my mother bought my brother and I a VHS copy of “King Kong vs. Godzilla” in a cheapy bin at a local chain store in order to keep us occupied and out of her hair for a night. She knew we loved the 1933 classic “King Kong” and even though we had not seen a “Godzilla” film what better way for kids to get introduced to the character then by seeing two of the mightiest giant monster’s go head-to-head on screen, and she was right, we loved every minute of it. Now finally after watching it again all these years later through adult eyes I can’t help but let the kid in me to go hog wild in seeing the world’s tallest fire breathing lizard drop-kick the world’s mightiest gorilla.

The plot is simple – pit two of the biggest movie monsters against one-another as this Japanese production takes the title character from the 1933 film “King Kong” and puts him in the boxing ring with the title character of the 1954 film “Godzilla”. Godzilla has broken free from his cold ice block and starts stomping on model houses on his way to Tokyo. In order to try to stop him as firepower doesn’t seem to work, the Japanese government decides to fight fire with fire and bring their own monster into the mix by kidnapping King Kong from his tropical island home. The result is a monster fan’s dream come true.
“King Kong vs. Godzilla” marked a turning point for both monsters as it was the first time either one were in color. It was also due time for a comeback for Kong as it had been nearly 30 years since the hairy fella had graced the big screen in all his stop motion glory. It should be noted that though this is an entry into the “Godzilla” franchise, it is not a direct sequel to the “King Kong” series. Due to this there are MANY differences in the character. First is the Kong design is done with traditional Japanese suits and not stop motion and the result leaves A LOT to be desired. Seriously Kong’s face looks like it melted in that hot summer sun. Second is Kong is much taller and stronger than he was in the original film. Kong would have originally dwarfed to the size of Godzilla and he was easily killed with ordinary bullets. This wouldn’t have left much of a fight for Godzilla as that bastard is nearly invincible so the filmmakers decided to bump Kong up to the same size to make it a fair fight. Third is Kong is given the ridiculous ability to grow stronger with electricity. Even as a kid I thought it was a ridiculous ability but it’s a left over plot device from the original script idea with Godzilla facing off against a giant Frankenstein monster… seriously that is fucked up.
The only version of the film I have seen is the American cut from Universal in which they added plenty new footage and stock music from such Universal library films as “The Wolf Man” and “Creature from the Black Lagoon”. This newly shot footage for the American version doesn’t jell great with the original Japanese footage and mostly consists of United Nation officials talking at the camera explaining what’s happening to the audience. This new footage is rather annoying and gets in the way of the mayhem going on in the film. The Japanese plot of the film is to be what expected for a Godzilla film with throw-away characters and odd humor, this time with the tone of the film being geared towards children as opposed to Adults like the first two Godzilla films.
“King Kong vs. Godzilla” is exactly what you would expect it to be – a dumb yet fun romp of a monster film with guys in bad suits kicking each other’s ass while destroying model tanks and cities. The kid in me couldn’t help but have tons of fun with the film and everything from the bad dubbing to the unintentional laughter (Kong knocking himself out with a rock is my personal favorite) makes this a great monster movie experience. Though Godzilla would go on to make tons of more sequels Kong wouldn’t appear alongside him again. Kong would appear in another Japanese production a few years later called “King Kong Escapes” but confusingly it is not a sequel to this film despite similar tone.