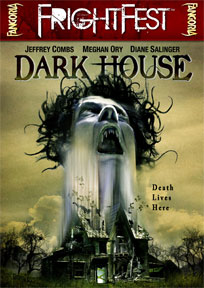 After two years of sitting on my movie shelves, I felt it was high time to finally crack into Fangoria's FrightFest line up. I had only previously watched "Fragile," but I definitely felt the need to justify my acquisitions of this line up. So I started with the film starring Jeffrey Combs. I mean, the guy is a horror legend in his own right, so "Dark House" already had something going for it. The problem with this odd Halloween "haunted" house flick is that Jeffrey Combs is the only thing it has going for it and sans a few attempts at taking a new path with the genre - "Dark House" damn near fails at everything.

Claire (Ory) has been dealing with nightmares and reoccurring flashbacks from her childhood when she discovered the dead bodies of a slew of children at the hand of a crazed foster mother Miss Darrode (Salinger). When her acting group is offered a chance to perform just for short time as characters and guides in the old Darrode house, which has been converted into a high tech hologram infused haunted house for Halloween by eclectic businessman Walston (Combs), she decides to face her fears of the house. Unfortunately, the ghost of Miss Darrode still has a bone to pick with Claire and she now has a slew of killer holograms at her disposal.

The concept of killer holograms being controlled by a ghost seems like the rejected plot of a "Star Trek: The Next Generation" episode to me. And it definitely would have been rejected in this fashion. "Dark House" simply does nothing to really make this idea flow or work. On a concept level, its just plain silly to see things like an axe wielding clown stalking down a hallway or a gas spewing tub girl pop out of said appliance. It's an excuse to throw as many ridiculous things as possible into the script with little to no logic and it never feels clever like it was meant to. And then, to top it off, the story essentially ditches these minute efforts in favor of your basic ghost story for its finale and caps it with the easiest to see and most cliche twist known to man. I won't give it away here, but you already know it. Trust me.

To match the sub par idea and script, the film throws in equally crappy execution to add to its dismal outlook. When I say that Combs is the only redeemable quality, I really do mean it. He saves this movie from a straight on one blood drop rating by eating scenes up relentlessly before his underwhelming demise. Other than that, it's just a run of the mill low budget horror film. Our lead in Ory is predictably irritable and surface level with her emotional roller coaster journey, the supporting cast is poorly built and performs worse, and director Darin Scott runs by the numbers through it all - never adding to the style for its lack in substance. Even with a slew of different ideas for "killer holograms" to knock off our victims with, most are uninspired deaths and the practical effects and CGI are mediocre at best.

Normally I'm willing to give a film the benefit of the doubt, but "Dark House" completely misses out on its concept and the execution is low bar at its best. The humor, the characters, the kills...all unoriginal and uninspired. There are plenty of unique takes on haunted house films and ones that are cliche but much better executed than "Dark House." I highly suggest one of those before this one.

Jeffrey Combs fan? Glutton for punishment? Feel free to click the link below to pick up your copy of "Dark House" for yourself.