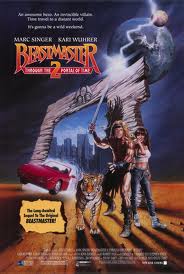 THROUGH THE PORTAL OF TIME


Oh my fucking God where do I begin with “Beastmaster 2: Through the Portal of Time”. We’ll just say the filmmakers definitely didn’t take notice of numerous sequels and fantasy films to come before and make all the exact same mistakes alienating hardcore fans of the loveable original 1982 sword and sorcery cult favorite. The final result is one of the most heated and hated sequels of all time and takes an un-honorary position right next to “Highlander II” on the shit sequel pedestal.

The film opens with an opening crawl that is a complete lie. I mean if the opening crawl doesn’t know what the hell is going on than how the fuck is the audience going to?! Dar, the Beastmaster (Marc Singer), is captured by an evil overloard (Wings Hauser) only to escape thanks to his animal friends (how did they not expect animals to come rescue a guy known as “the beastmaster”?). Our evil overloard then teams up with a sexy witch (Sarah Douglas) to open a a dimensional portal (not a time portal… the title lies!) to modern L.A. and the beastmaster must stop him with the help of a spoiled valley girl before, get this, he steals a doomsday device to turn his home desert wasteland world into… uh… a desert wasteland?!

The first major problem that all six screenwriters made (seriously it took six to write this mess?) is that the film completely goes against all the rules and and set-ups made in the original almost as they wish no one going into this sequel saw the first movie. Did they not take notice off all the hatred of “Highlander II” the year before that went down the same road? The second problem is they decide to pander this crap to children going against the hardcore adult nature of the first film, as if they never saw the disaster that called itself “Conan the Destroyer”. And thirdly, no doubt to save money, they decide to dump our fantasy hero into a modern city environment ala “Masters of the Universe” in order to so save money on the costume and set design and thus loads up the tedious second half with our annoying heroine explaining to our hero all about modern technology.

Is there anything good about this waste of celluloid? Well two things… Sarah Douglas’ breasts. I never really viewed her as a sex symbol before this but the filmmakers make all of her assets but sadly they are undermined by her deplorable dialogue. Other than her chest everything is wrong with this sequel. The fight choreography is bad, the continuity with first film is lazy, the dialogue is about as subtle as a fucking train wreck on a boat and the characters make absolutely insane decisions like why the fuck would our evil overloard escape the Beastmaster by taking refuge in a Zoo… you know a place full of animals that our hero can control. I mean come on! The film however hits absolute rock bottom when our heroes drive past a theater on the L.A. strip that’s playing, get this, Beastmaster 2. I remember watching the film up to this point as a kid then turning it off as even my eight year old mentality knew that was too lame. Well look on the bright side maybe in this parallel dimension “Beastmaster 2” doesn’t blow ass.

“Beastmaster 2” is one of the most disappointing sequels I have ever seen. The original film may not be cinematic genius but it is hands down one of the best “Conan” clones to emerge in the early 80s and one of my favorite sword and sorcery flicks. This sequel goes against every aspect that made the original so enjoyable by making the setting in ‘modern’ LA and pandering the lazy story to children. Unlike “Highlander II” which has earned a cult audience with its insulting ineptitude, “Beastmaster 2” remains a hot spot with fans and is equally spit on today as it was back in 1991. However much like “Highlander II” it didn’t kill off the franchise (how I am not sure) as Beastmaster forged on with a made-for-TV sequel “Beastmaster III: The Eyes of Braxus” and a late night television series.