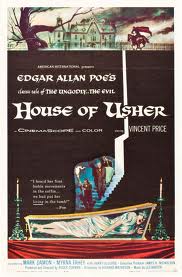 AKA "The Fall of the House of Usher"

Roger Corman has proved time and again how he can make meniscal budgets look like a million bucks and none more than his adaption of “The Fall of the House of Usher, the first of seven adaptions (technically six but that will be explained more in future reviews) of short stories by famed and troubled author Edgar Allen Poe.

The film opens with a handsome young man (Mark Damon) riding through a lifeless and ghastly looking forest that opens up to reveal a dilapidated old mansion. Upon arrival he demands to see his fiancée but her brother Roderick (Vincent Price) proves to be extremely difficult. It seems he doesn’t want her to wed as there is a curse upon the Usher family and if she bares children, the cursed bloodline will continue. Roderick even goes to the trouble of making his lovely sister seem dead and burying her alive in the family crypt, but her lover doesn’t buy it and must frantically try to save her before the Usher curse befalls them both.

For a film with relatively no budget Corman professionally crafts a gothic atmosphere of dread. The entire set from the mansion design, to the family crypt to the paintings of the Usher family members are just downright creepy. To top it off we have a wonderful cast headed by the lovable Vincent Price and a home run performance by Mark Damon, who does such a good job that he even dwarfs the likes of his more famous co-star.

The low budget does show through at moments, especially in some of the special effects mostly consisting of burning buildings. Still the effects for the budget and time are easily forgivable. Corman also doesn’t seem to have enough for a feature length film so he pads out some minutes with an odd dream sequence that serves nothing more as filler. Price’s performance is also far more hammy than usual, and characteristic that would follow him through most of his performances to come. His over-the-top portrayals can rub some horror fans the wrong way but I find it charming.

“House of Usher” is a great Edgar Allan Poe adaption and gothic horror film to boot. It’s just amazing how well Corman adapted the story with only a fistful of dollars and a few cast members. Modern horror audiences who live on gore and violence will no doubt find the film slow, talkative and dated but fans of gothic horrors will find plenty to eat up. “House of Usher” proved to be a big box office draw so Corman and crew forged on with their second Poe adaption “The Pit and the Pendulum”.