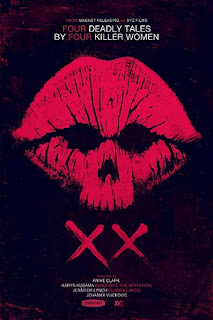 At this point, the horror anthology has become something of a gimmick. Not that I’m complaining, far from it as I love short horror films and these kinds of anthologies give young and/or upcoming artists a chance to strut their stuff in front of a larger audience. Yet, at this point they have become such a regular occurrence that the marketing and approach must rely on a hook to attract its audience. For XX, the idea behind its series of short films is that they are all directed by women. While the fact that this even should exist as a “gimmick” irritates me to some degree (the gender gap issue in the film industry is a huge problem and one that needs to be rectified immediately), but it’s wonderful that this film wanted to showcase four very talented film makers in this manner. It helps that XX is a great horror anthology too. It’s not perfect as a film on the whole, lacking the narrative flow to get all the segments to work together, but each one is an entertaining romp of a different approach that does its job as a short horror film. Horror fans will find something to love here and it comes with a strong recommendation.

Like many of the newer horror anthology films like ABCs of Death or Holidays , XX does not necessarily worry itself with trying to make all of the stories fit within a bookend concept outside of just being four stories in one film. There is an introduction, epilogue, and threaded moments that are essentially a set of odd stop motion animated images and a loose story which is remarkably well done and effective at setting the tone for the film. It’s not a reason as to why the stories are tied together like V/H/S and its tape watching and it’s not even close to the cohesive narrative that weaves stories together in the vein of Trick R Treat, but it’s a tone setter that works. It’s one of the reasons its hard to give this film a higher score because it does seem like they could have given a roundabout story that was effective, but for what it is it’s well executed.

The stories themselves are a diverse set. XX may not establish its theme outside of the marketing, but that’s fine as the stories hold their own. The first one in the film, titled The Box, is perhaps the strongest of the set that features a unique spin on gender roles and a gripping short story concept that harkens back to the tension and intent of classic stories written by Rod Serling or Richard Matheson. The vague concept for this first one and the execution of that kind of suffocating mystery definitely makes it one that sticks with the viewer long after it ends and starts off the film on a high note.

The rest of the film don’t quite reach the heights or low key horror that The Box does, but each certainly has their own charm and strong sense of purpose to bring to the table. Truthfully, there isn’t a bad one in the bunch, at least not in the sense that most horror anthologies have one or two segments that are one which viewers will skip in future watches, and that’s a statement to the quality of the film as a whole. The Birthday Party is the one segment that does stand out as the ‘least’ horrific of the four though, focusing more on its dark humor concept than anything else, but even then that’s not a huge knock on it as it perhaps as the most effective finish of the set. The third one, Don’t Fall, is more or less a quirky monster segment, owing a bit of its foundation to the likes of films like Demons or Evil Dead, and it gets off as entertaining more than anything. The monster effects are impressive and while it ends just as it feels like it’s starting to get going, that entertainment angle is a nice change of pace before XX heads into the fourth and final segment, Her Only Living Son.

Of all the portions of XX, Her Only Living Son is perhaps the most cinematic and easily could have been elongated into a feature length film. Director Karyn Kusama, who directed The Invitation which was one of my favorite horror films of last year, handles the subject matter with finesse and gives it a slow burn style fill that works as it builds a bit of mystery. The problem with it is that this segment feels like it needed to be a full-length film to properly dig into some of its themes and interesting reveals. Easily one of those “good problems to have” for a short film. Still, the performances are strong, the visuals are too, and it carries this segment to being the second best of the lot and one to end the film on a high note.

Truthfully, if XX had been able to come up with some kind of slick reason for these stories to be together in one film this could have been one of the best horror anthologies out there. Each segment is entertaining for its own reason, they opt for a diverse set of topics and approaches, and the quality of execution is worthy of having them in an anthology. While the intro and threaded animation is good, it doesn’t quite lift the series of short films like other anthologies find a way to make work. The rest, however, is pretty impressive and gets a solid recommendation for horror fans.

Here's to hoping that XX starts a new franchise dedicated to its themes. I’ll be there for every entry.