I am ashamed. Part of my shame comes from enjoying B-action movies so much. Most of that shame arrives in the form of how much time I devote to downright awful modern Steven Seagal films. The problem that arises in my reviews of these films is that I essentially say the same thing time and time again. So for this latest entry, I’m just going to review the last two films released that star Seagal in one review. Saves me time, it saves you time, and I don’t have to repeat myself until the next round of films comes out.

First up is Contract to Kill. Directed by long time Seagal collaborator Keoni Waxman, Contract to Kill might honestly be one of the worst films I’ve seen from the modern era of the actor. Straight up, it’s terrible. There are a handful of things I wanted to like about it, moments where Keoni Waxman shows he might be a good director if he were given half of a decent budget and didn’t have to cater to the massive issues of having Seagal in the lead, but the film itself is such a massively missed opportunity to embrace its B-grade concept that it was hard not to be completely baffled by its ineptitude. There are moments in this film that almost defy its own low standards. An action scene in the opening where Seagal just stands in front of a green screen as it randomly cuts to black to cover up the nonexistent action.  An introduction to one of the characters via a drone that carries an AR in the most awkward way possible. Most of the first act is dedicated to Seagal and his “team” spouting off political and international gibberish. My favorite is a scene where Seagal’s Harmon interrogates a terrorist where most of the other guy’s lines include “how could you know that?” because the hero is so well informed that he never needed to interrogate the guy to begin with. The list goes on and on. Don’t even get me started on the horrific editing or the strangest romantic subplot I’ve seen in one of these films (and I’ve seen a lot of bad ones).

Contract to Kill might have been entertaining if it wasn’t so damn arrogant in how it goes about selling its B-action story of cartels partnering up with Islamic terrorists. Seagal remains one of the worst things about his films and Keoni Waxman and the rest of the cast and crew must cater to his flaws and whims. In this one, there just isn’t enough charm or ideas to get the audience to roll with it. I’m willing to forgive a lot of stupidity or poor execution for the sake of charm or entertainment, but nothing in Contract to Kill could pass for any of that. 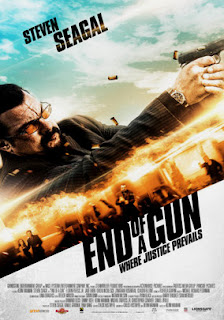 Secondly, let’s go back to the one film previous, End of a Gun. While this one suffers from many of the same issues that Contract to Kill was plagued by, namely some of the terrible uses of editing, stand ins, and pacing issues that come with having Seagal in the lead role, this one does have one ace in the sleeve that makes things a lot easier to swallow. End of a Gun is at least fun. It has kind of a loose tone to it with its anti-hero antics and ridiculous characters and it never seems to take itself as serious as so many of these movies seem to do far too often. It’s a bad film, sure, but at least I was laughing during this one as it would randomly throw the most silly things at its audience. Contract to Kill was just too deadly serious.

As mentioned, Seagal is only doing what Seagal does nowadays in this film as he squints through his colored glasses, mostly talking in a monotone voice, never acting, and trying his hardest to look tough without moving a hair on his Dracula inspired haircut. The saving grace of this film is the secondary cast. It has a fun and intense villain, the police officer that helps Seagal’s hero Decker is eating up scenery and Keoni Waxman is doing his best to try to make this film on a shoe string budget and cater to the star that sells copies of this film off of Wal Mart shelves. The action here is solid if it’s not editing around Seagal’s obvious distaste for doing anything physical these days and it has a certain B-movie charm that make some of the horrific plot lines seem entertaining. I mean, the entire romantic/sensual subplot is fuckin’ out  there, but at least it’s easier to laugh at it when it seems to not take itself so seriously.

As is though, I’m guessing that the double whammy of Keoni Waxman/Steven Seagal straight to home video action films are far from stopping. Expect another set of reviews to say essentially the same things about Seagal being the worst thing about his films and how these films feel like their produced for $20, a bottle of Jack, and the cost for a night for Seagal in the strip club. Contract to Kill though is easily one of the worst I’ve seen from films of this ilk and even pales in comparison to End of a Gun which is nothing to write home about either, outside of how silly it is. Truthfully, you know already at this point whether you are going to enjoy these films for what they are or if you are just going shout obscenities at your TV and curse the Gods for tricking you on spending money on them. Go with your gut feeling for these.

Written By Matt Reifschneider
Posted by DarkReif at 8:41 PM