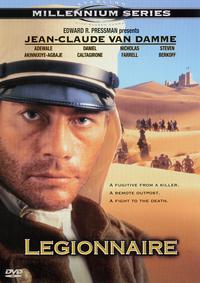 Time can certainly play tricks on a person. I remember watching Legionnaire when it first came out and thinking it was good, but too dramatic and not fun like most of the other Jean-Claude Van Damme films that had arrived before that. As time went on, I had convinced myself that it was a terrible film simply by way of thinking that there is no way JCVD could possibly have made a decent dramatic film in that time frame. Now that I have revisited Legionnaire, I must admit that it really is one of the better films he has ever made. Flawed, sure, in a lot of ways, but one that aspires to be something much larger and heavier than anything he had made up to that point.

All Alain (Van Damme) had to do was go down in the second round. He didn’t though. He took their money and was planning to run off with his ex-fiancée to America when it all went wrong. To escape with his life, Alain decides on a whim to join the French Foreign Legion and is quickly sent to Morocco where he will have to decide the value of his own life along with the lives of the various outcasts and desperate who have become his friends.

Legionnaire has a lot of great things going for it as a dramatic period piece of cinema. The score is fantastic, the visuals are on point to be a decent period piece war flick that builds some great epic scenery, and it’s littered with a lot of fantastic secondary characters whom are given a lot of effective moments by the cast portraying them. Even JCVD gives his best as an actor here, although it’s obvious that they attempted to water it down a bit more for him so he didn’t have to stretch his emotional side too much. The action is crisp and director MacDonald handles the balance between humor, drama, and action with a sense of purpose that raises the film above its issues in the writing. It can be a tad predictable as it falls in line with a lot of other war time dramas, but considering most of the generic action or silly B-concepts that he was working with prior to this, it’s hard not to appreciate what they attempt here.

Truthfully, most of the issues that arise come from two aspects of the film that tend to bog down the narrative structure. Firstly, Legionnaire feels rushed in the second act. The opening is a nice little build that gets JCVD’s character into the French Foreign Legion with a fun romantic subplot and some evil gangsters. It’s not the most brilliant of set ups, but the time period setting and action tid bits are a nice touch. The second act proceeds to add in a lot of new characters and it must rush the narrative to introduce their stories and get the audience up to speed with where they need to be for the dramatic pieces to work. Some of it works well, including the establishment of a ex-British solider with a gambling issue who owns the screen when he delivers his handful of monologues, but some of it just doesn’t take the time to ground itself. The second issue is that it ends on a rather odd note. It needed a falling recap to bring the opening gangster/love story full circle. They add in a few things in the final act to attempt this by having some gangster hoodlums show up at their encampment, but again it feels rushed and not nearly as effective as it might have been. Otherwise, it goes into the huge battle where characters die and emotions ring out in some interesting ways and then it just kind of ends without finishing some of the subplots to bring everything to a close. It’s almost frustrating in a way. Just fifteen more minutes to wrap things up would have been a God send, but it’s not there.

Still, going into Legionnaire, I had convinced myself that my memories of it being a decent film were false and that there was no way it could actually pull off its intent. I was wrong. It has plenty of great A-grade executions to expand on its premise and it showcases JCVD as an actor willing to stretch himself a bit beyond the usual action material. He doesn’t even do the splits, although there is another sequence where they show his naked butt that I’m convinced was in his contract for all of those films in that period. Fans of JCVD may not enjoy it as it is a drama focused war film and not necessarily the tongue-in-cheek action he is popular for, so keep that in mind. For those willing to try it out, I highly suggest Legionnaire as a great way to burn a couple hours. It’s much better than expected.