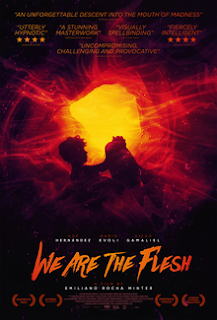 In a desolate and run down building, Mariano (Hernández) has been living in solitude, trading a gas/liquor like substance for eggs from a mysterious hole in the wall. When two starving young adults (Evoli, Gamaliel) looking for shelter find him, he will trade them shelter and food for work – building a strange cavern. However, as time goes on their sense of reality becomes blurred as his as he forces them to push further and further beyond the realms of reason.

We Are the Flesh is a film that wears its ambitions on its sleeves. To call the film a ‘narrative first, plot second’ kind of film would not indicate just how much the narrative is the focus and the plot is non-existent. The synopsis above is essentially the entirety of the plot. There are a few tricks in the sleeves of the film, throwing a handful of great curve balls at the audience as it goes and shocks them with awkward and occasionally humorous twists in its depraved storytelling approach, but plot is certainly not on the list of things that this film wants to focus on. Expect a surrealistic and nightmarish approach to its visuals and tone, but don’t expect it to be grounded with any kind of malleable character growth or classic structure. This film has no need for those.

This does allow the film to craft one of the more engaging atmospheres of surrealistic horror I’ve seen in a long time. This seems to be a trend in horror currently, embracing atmosphere, tension, and gorging on the visuals and/or audio, but We Are the Flesh takes it to a whole new level in odd and abrasive ways. The performances are massive and the visuals and auditory approaches to sound design (and the use of music) with its post-apocalyptic like setting and the weird cavernous place that the three lead characters craft in this run-down building are engaging in many great ways. There are a lot of sexual visuals and often disturbing acts used in the film to create this shocking tone that does not shy away from diving straight into exploitation territory. For those with a sensitive cinematic palate, graphic scenes of incest, cannibalism, and other acts of this nature will certainly make you immediately turn away from the film. We Are the Flesh embraces the grotesque to parallel its surrealistic and occasionally psychedelic nature and it can be a bit much for those not prepared for it. So also keep that in mind before digging into this feature.

As a film though, it’s hard not to love the artistic nature it brings to its exploitative concepts. Director Minter brings a lot to the table here and I was hooked, for better or worse, from the first minute until the credits rolled. However, the problems that I found with the film are in its lacking foundational structure to give all of its looming atmosphere a reason to exist. Perhaps I was expecting more from it in this sense, as it teases character growth or plot points only to pull away from them for the next golden grotesque visual or sound piece. The themes about spirit and flesh being one and the disregard of societal roles and structures is interesting, but without the foundation it ultimately feels a tad hollow which pulls the film down from being as effective as it might have been given all of the great executions of its concept.

For those looking for something completely bonkers and off the rails, than We Are the Flesh is certainly that film. It is NOT for everyone with its disturbing and sexualized sequences to take it to that next level of insanity, but the execution is impressive to say the least. It’s a beautiful film, visually, and the use of the performances and sound design only elevate the artistry of its tone. If only it had something to ground it all on then it could easily be thrown in with the greats of blending abrasive art and cinema like Cronenberg. As is, We Are the Flesh is an overwhelming cinematic experience and it will mostly certainly solidifying its standing as an instant modern cult classic for those willing to partake.