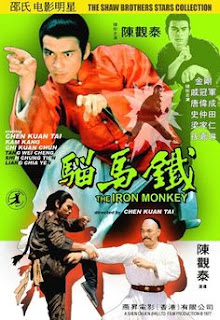 The Iron Monkey is a film that always seems to come with the highest of recommendations from kung fu fans. However, my initial viewing of the film, some ten years ago, wasn’t one that left a mark on me. It was good, but your standard kung fu flick. So, it was high time to revisit the film and see if it would have improved over time, remain in the same echelon, or fall to being one of those overhyped flicks made popular by the will power of a vocal few. Fortunately, The Iron Monkey is a film that I found more impressive this time around than I did the first time as it plays its style loose and straight forward. It is not, however, the instant classic that belongs in the upper levels of the genre that I find so many fans claiming. If anything, the film is fun and shows a lot of interesting character depth that makes it solid watch and if a viewer goes into it with that mindset then The Iron Monkey is a film eager to please.

Monkey was hot headed and cocky, but when his father and mother are slaughtered by a vicious general looking to scoop out resistance to the government he is hardened to stop them. To do this though, he must become a better fighter and find a way to get close to the general. This road to vengeance sends him to the Shaolin Temple where he will study the Monkey Fist and it will also send him onto a road of enlightenment.

The most obvious new element that stood out to me on this revisit to The Iron Monkey was just how director and star Chen Kuan-Tai really takes his Shaw Brothers experiences and brings them to the table here. There are moments where the influences of Chang Cheh can heavily be felt, particularly in the darker tones that show up in the first act to give meaning the to the events later on, and the style of how he shoots the action. For that the film feels like a natural extension of the style for those who are fans of the Shaw Brothers. In that sense, The Iron Monkey works to be a charismatic “spin off” if you will and remains highly entertaining.

The style and lessons that Chen Kuan-Tai brings to the table also allow The Iron Monkey to be a good balance of entertaining and heartfelt. The film spends a lot of time developing the main character and his motivations for the film, resulting in some solid dramatic scenes in the first act, and then it spends most of the second half focused on the action so fans are going to get a little bit of both. There are a lot of the iconic kung fu sequences that one expects, including a brief, but interesting training montage, and one can pull out the list of tropes and pretty much knock all of the off. The casting is superb in the film, including the series of villains (punctuated by a snazzy appearance from Beardy as one of the general’s top fighters) and the film benefits from this too. Considering the talent, it also helps that the choreography is decently done and dynamic leading up to a great Monkey vs Eagle Claw style for the finale that kung fu fanatics will appreciate.

However, expanding on the films dramatic and entertaining balance, The Iron Monkey lacks a narrative flow and structure to keep that balance firm throughout. As mentioned, the first act is drama heavy and the final act is almost purely action (trying to recap the character arc in a tacked on final moment in the film that needed to be elongated and elaborated) and that can deter some of the depth that the film has going for it. It makes for a film that does feel ultimately uneven and that’s part of why it stumbles at being one of the greats from the genre. All of the pieces are there, but it doesn't quite have the knack for lifting all of them up to that next level.

As is though, The Iron Monkey is a massively entertaining film and one that showcases Chen Kuan-Tai’s talents in front of and behind the camera. It tends to be a little bit too predictable and a tad uneven in its narrative structure, but the film maintains a spirit and energy to keep the audience hooked and then snags them with its almost relentlessly well-choreographed action in the third act. Is it a top tier martial arts flick that so many claim? Perhaps not, but it is still an impressively solid one that deserves some recognition.

Written By Matt Reifschneider
Posted by DarkReif at 11:07 AM