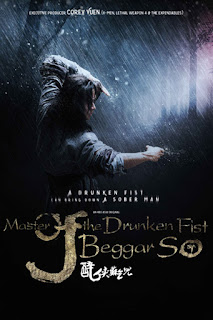 When HBO Asia announced that they would be getting into the exclusive content trend with a couple of films based on Chinese folk heroes, I must admit that I was pretty excited. Not that I was expecting these films to be award winning or even all that great in quality, but the idea that martial arts films were going to be a growing commodity and even get a US release was one I can get behind. The first of the two films for this double header was Master of the Drunken Fist: Beggar So, based on the folk hero that serves as an origin story of sorts. The film itself is a mixed effort, suffering from its low budget and some cheesy stylistic choices, but all in all it remains an entertaining film that has enough charm and fun moments to not be a total bust.

So Chan is one of the best military scholars in the field, but his arrogance and foolhardy behavior constantly get him into trouble. Enough so that he becomes a pawn in a much bigger conspiracy between two government entities that lead him to being expelled and his family being killed. This leads him to the Beggar Clan where he vows to learn the legendary Drunken Fist and take revenge on those who killed his family.

Beggar So is mostly a film made for martial arts enthusiasts. The story has certainly been told in a plethora of ways varying from secondary characters in films like Drunken Master all the way to fantasy renditions like True Legend. For the most part, this one plays things straightforward as a period piece. It dabbles in some tone shifts, starting off with a kind of humorous approach, but it sticks mostly to its dramatic and action oriented foundations. This can be problematic as the film, despite some weird plot devices that includes a fantastical spiritual journey for our lead in a prison cell when he’s struck by lightning (?!), can be a bit dry overall. It’s a film that ultimately follows the tropes so closely that it comes off as predictable and when it’s not that, it feels out of place. It also doesn’t help that it jams quite a bit of material into its hour and a half run time with a smaller romantic subplot (that works) and a strange third act plot twist that needs a lot of explanation to even be remotely effective. At times it just felt like perhaps it was meant to be a longer film, but it was edited down at the last minute to get it to an hour and a half length.

From there, the execution of Beggar So can be hit or miss too. As I mentioned, it starts off in a humorous manner that can be a bit off putting with its early 90s Hong Kong vibes of slapstick and weird visual choices, but it does get a bit stronger as the film goes. These style choices, which include a lot of slow motion and some odd wire work, can be the biggest detriment to the films action and narrative flow, but it’s not anything that martial arts fans haven’t seen in those 90s films that this seems to homage. It helps that the film does have quite a few charming and off beat performances to carry its loose plotting and the action is just decent enough to keep fans attached, even with the stylistic choices. It’s charming and entertaining overall, but even then it can be spotty.

In the end, I enjoyed Master of the Drunken Fist: Beggar So for what it is as a made for TV film, but it’s hardly any kind of instant classic. It’s upfront with its intent, but pretty patchy in executing its story despite some charming pieces and interesting ideas. Martial arts fans may enjoy it for its more classical spin on the Beggar So story, but even then, it will hardly be one that earns a cult audience outside of a select few. Still, I’m looking forward to seeing what the other HBO Asia original film has to offer. Keep on the lookout for a review for that when I get around to it.

Written By Matt Reifschneider
Posted by DarkReif at 9:36 AM