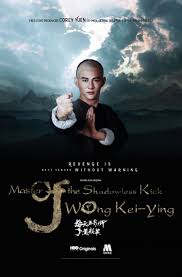 The second of the two HBO Asia original films, Master of the Shadowless Kick: Wong Kei-Ying is of the same ilk as its predecessor Master of the Drunken Fist: Beggar So, but with a slightly different approach. Like the other film of this duel set, Wong Kei-Ying is based on a classic Chinese folk hero in a modern retelling of a classic tale. It features a low budget with some generally melodramatic made-for-TV executions that may rub viewers the wrong way. If you have reservations with that or have no interest in traditional martial arts cinema, then this one might be a skip. For me, Wong Kei-Ying actually shows improvement over Beggar So by trimming a lot of the fat and focusing down a bit more on a more dynamic narrative – even if that narrative remains decently predictable by kung fu flick standards. It’s one of those films that will mostly interest kung fu fans, but for that niche it remains entertaining enough for the watch even if it is hardly the best version of this character that has been put to film.

Wong Kei-Ying is one of the best physicians in town and holds the banner high for doing the righteous and just. When a local General takes a massive stance on helping immigrants and fighting against the opium epidemic, Wong Kei-Ying is happy to assist him. However, as he becomes more involved in the war on opium, he finds that corruption runs deep in the General’s ranks and he will end up fighting for his life and the lives of his family if he is going to see this through.

Like Beggar So, the legend of Wong Kei-Ying and his much more internationally famous son Wong Fei-Hung is one that’s ripe for interpretation and cultural relevance even in 2017. While many of these folk heroes are based in a historical context, with mention of the opium boom that this film focuses on, there are a lot of decent moral lessons about justice and fighting the good fight that really allow this story to live on. For Master of the Shadowless Kick, the story is told straightforward. For those familiar with kung fu tropes and themes that arise in these films, this one doesn’t do a lot to really expand on that outside of telling the story of when Wong Kei-Ying became engrossed in battling corruption and the opium trade. If anything, this trimmed down approach is more for those that might not be familiar with the hero and is a good introduction to him.

When compared to Master of the Drunken Fist, Master of the Shadowless Kick does do a few things better and the first thing is that the film is much more serious and cuts out most of the comedic aspects. Considering the themes of brutal corruption and drug addiction, this makes the film feel much more cohesive and dramatic. The execution can be a bit too melodramatic at times with its use of slow motion beats and some of the rushed emotional moments, but it works much better for the narrative. It helps that there is a cast that seems to hold their own on film, particularly when it comes to the multitude of villains that arrive. The film also focuses solely on the titular hero. Like the film Iron Monkey (also based on the same legend, albeit a much more fantastic approach) it only uses his son as a secondary character and doesn’t cater to his legend as much which is somewhat refreshing. The film is hardly perfect in this sense, but trimming down the genre bending and focusing on traditional martial arts cinema writing makes for much more enjoyable and cohesive film that will appeal to even non-fans of the genre.

The one back lash to this, despite its obvious low budget issues and melodramatic moments, is that the final act feels out of place and uneven compared to the rest. Being that it’s a martial arts film, it has a decent amount of action, but when Master of the Shadowless Kick amps up the entertainment value in the third act for its big battle sequence (which features two random henchmen that seemingly come from nowhere) it feels out of left field. It’s way cheesier and gimmicky than anything else in the film previous, complete with his son being hung over a pit of metal spikes (?), and it feels a tad off balance. Not to mention that the final fight between the villain and our hero is a bit of a let down which takes the film’s worth down a couple of notches. Considering how they essentially build up this battle from the very beginning, including a training montage where Wong Kei-Ying learns some new kicking maneuvers (although the term Shadowless Kick is actually never mentioned), this does feel like something of a let down.

Still, while Master of the Shadowless Kick: Wong Kei-Ying is a flawed film, I had fun watching it and felt that it’s increased focus on its period time setting and character driven drama made for a decent way to burn an hour and a half. It’s a great introduction to the character if one is unfamiliar with him and it moves things in a trimmed enough fashion that it’s not overwhelming. It could have been better with a slightly bigger budget and focus on refining the style, but as is it’s a decent martial arts flick. It’s safe, but decent enough.

Written By Matt Reifschneider
Posted by DarkReif at 7:33 AM