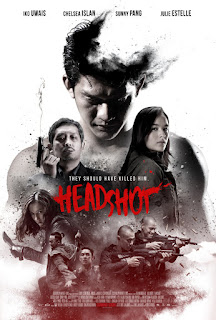 The Mo Brothers have impressed me since I saw Rumah Dara (the short film) years ago. Onward with the full-length feature, Macabre, I sank myself into the world of Timo Tjahjanto and Kimo Stamboel's twisted minds. A few years later, they unleashed Killers, and while I don't love it quite as much as I did on initial viewing, it's still quite solid. Needless to say, when their project The Night Comes for Us (with Joe Taslim of The Raid and Fast and Furious fame) went under, I was gutted. Also, like their fellow director and friend, Gareth Evans (The Raid), the Mo Brothers had a plan B for their failed project, and that comes by way of Headshot a.k.a by far the best thing the Mo Brothers have done to date.

The story is quite simple and takes the backseat of their blood-soaked adrenaline fueled action fest... something that they tried a little too hard on with their previous work, but I digress. Washed ashore on a beach, lays a man with a bullet in his head. He recovers from his coma 2 months later, and we realize he has a dark brutal past behind him. Said past leads to an excessive wave of punches, kicks, stabs, and multiple bullets whizzing in every direction possible, and it's glorious!

The fights take the brutal gore elements from The Raid franchise, that Iko Uwais stars in as well, and dials them up to 11. I can't recall cringing from movie kills ever in a film as much as I have with this one. From a machete in the face (quite literally), to multiple limbs being bent and snapped in ways that they shouldn't, this one has got all the blood you could ever want, and then some. I actually don't think it is too excessive, as the film itself never gets too serious, and adds some black humor to the mix, even with the kills, and Iko echoes Jackie Chan in some of his comedic timing. If Chan was ever in a gorefest, it would be Headshot.

The slasher elements from their previous efforts, most certainly trickle through to this, and more so than the other. There are more classic kills in this than even the likes of Macabre or even Safe (Timo and Gareth Evans' V/H/S/ 2 segment). If this was their backup for The Night Comes for Us falling out, then I am beyond curious as to just what the hell exactly that project will hold for us, which thanks to this movie, is back on track.

Where Headshot falters a bit would be in the story and character development, but I think even then, as previously mentioned, it works and I think the performances are all excellent across the board. Iko gives perhaps his best performance yet, giving me hints of Yen in his gentle heart and facial expressions. Yen is no great actor, but he gives off charm like no other, and Iko certainly manages to give that same comfort. The difference between him and Donnie though, is when Iko snaps, he is scary beyond all imagination!

In terms of the characters, I think this film does a nice job of mixing humanity with a bit of insanity. Lee, the Chinese villain of the piece (nice touch for his character), is possibly my favorite character, as he is completely bonkers, but he truly believes in what he is doing, and that it is the right thing and is absolutely beneficial for him. I can always admire a bad guy with a purpose and drive, and it is very clear what he is doing, even though there are some things that aren't answered, it sort of elevates his status from "Badass Baddy" to "............ Whoa!".

Technically speaking, this movie is far and beyond anything the Mo Brothers have done thus far. The cinematography is amazing, save a few handheld hiccups here and there, but there are plenty of excellent shots about, and some nods to their previous works that die hard fans will get (perhaps I am reading into it too much). The music, while I didn't much care for earlier on, gets better and better as the run time carries on and actually has become one of my favorite scores of recent memory. Some creative editing in the action scenes, mixed with some intriguing transitions during the quieter moments really add some flare to an already visually impressive film.

Some have called this film Raid-lite, but I would argue that it belongs right beside those films, but just as that, beside. It doesn't try to be The Raid and doesn't want to be. Sure there are nods, and even some similar face-offs, but it most definitely has an identity of its own and bathes itself in its own world and style. Where The Raid is brutal and go-go-go, Headshot adds in a lot of dark humor and self-awareness in its own bloody absurdity without ever winking into the camera.

The Mo Brothers have once again created one entertaining bloodbath, centered around two great leading characters that have nice chemistry. They never let the blood drown out the heart, but sometimes they set the heard outside to rip your intestines out, and slap you a couple of times in the face with them, and for that I thank the both of them, those brilliant bastards! Headshot may just be my favorite action film of 2017, just going neck and neck with John Wick 2. Bravo!