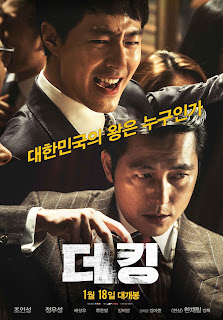 A masculine driven tale of rising to power and the corruption of law and justice, The King is a very entertaining and beautifully shot film that features a star studded ensemble that fires on all cylinders with powerhouse performances from its main players.

Jo In-seong is Park Tae-soo, a young man hungry for power and money, which he quickly achieves over a hustling study to pass the bar exam to become a prosecutor, after seeing his father slapped about and trembling in fear at the hands of a man with that very title one day.

Without spoiling too much, the movie plays out in a typical good man gone bad due to money and respect sort of way. It's a gangster film in a sense by way of The Wolf of Wall Street. I have heard the film get compared to Scorsese's picture endlessly, and I most certainly can see why, but at the same time I think The King has its own identity and very much goes in a separate direction, but there are plenty of moments throughout that may feel a bit too familiar.

Jeong Woo-seong is the head of the organization that Jo joins later on, and he is one slimy, cold-hearted... suave bastard that will go to any extremes he must to maintain his place on the throne. The dialogue between he and Jo is vicious and smartly written. Many moments left me on the edge of my seat, and the intensity becomes suffocating at times, which is fantastic.

Rounding out the trio is Bae Seong-woo as Yang Dong-cheol a.k.a the man who gets Jo his job in the big league, and he is perhaps the most memorable and intriguing character in the film. I don't want to get too much into the good stuff, but his performance is standout in a film already filled with great performances. I think this film will shape the man's career, and I'll leave it at that.

On a technical level, this film gets high praise, from the cinematography, that keeps you engaged and close-up in the action, with some neat lighting and camera movements, to the phenomenal sound editing and stellar soundtrack, The King once again delivers the goods! One of my favorite moments features the gang dancing beat for beat to the 90s pop group Clone's hit song 'Nan'. It was hilarious and absolutely perfect!

Where the film falters and sadly goes from being one of the greats to one of the very goods, would be the ending. Now, I heard the film company quickly gathered the cast and crew to reshoot the entire ending to match a current scandal going on in Korea, but I'm not sure the exact details on it all. That being said, the perfection of The King comes quickly crashing down with a severely rushed and out of the blue ending that does not compliment the film whatsoever and seems to go against what was built up, and only deteriorates the film's overall high quality. I'm still frustrated even after letting time pass. Look, I can forgive the laughable flashbacks, even with no casting of younger actors to play the characters in their youth, at least I was still engaged. This ending completely baffled me, and it isn't smart like the rest of the picture.

In the end though, I'd most certainly highly recommend The King for all the aforementioned reasons. It truly is a great film, I just have no idea what they were thinking with such a crapped out ending. Oh well. It's one I certainly hope more people get the pleasure to see, and I can't wait to jump back in. See it!