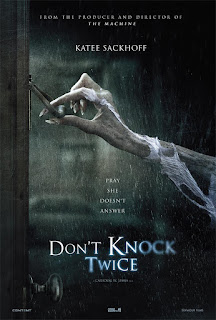 Looking back, I guess it’s pretty easy to say that the new trend in horror is creepy and demonic witches. Replacing the long dark haired young girl ghosts and pretty vampires of the last few trends, this does seem to be a welcome change of pace as it feeds into the recent trend of atmospheric horror that dominated the genre last year. The latest entry into this style is Don’t Knock Twice. Don’t let the gimmicky, tongue-in-cheek, throwback title fool you though, Don’t Knock Twice is less about being a quirky homage to decades prior of the entire ‘don’t’ title horror movement and instead it’s a modern atmospheric witch film to be lumped in together with the likes of Lights Out or the recent spin on Blair Witch. Of course, that does mean that the film does have a certain mainstream consumable nature to the entire thing with its high production values and easy to understand plotting. However, it does retain a few aces in its sleeve to make it a fun and enjoyable horror experience and one that deserves more attention than it has received thus far.

Jess (Sackhoff) and her husband Ben (Mylan) have been trying to reconnect with her daughter Chloe (Boynton) for some time now. However, it’s not until Chloe tempts fate with a friend and ignores the superstitious warnings about an old woman’s abandoned house that she feels like she needs her mother for the first time. Together they must face a supernatural force eager to take Chloe. How much will a mother sacrifice for a child she barely knows?

Don’t Knock Twice starts off on all the right notes. The entirety of the first act is grade A mainstream horror. It’s got a slick palpable atmosphere, the set up for the title and the villainous witch is well paced, and the character development for the mother and daughter duo hooks its audience and makes them care about the outcome, a trick that too often many horror films fail to accomplish. This portion of the film sets up some strong performances, both of the leads have strong on screen presence and their chemistry works perfectly for the narrative and plot, and establishes Caradog James as a director with a knack for building strong visuals and focusing on the needed foundations to sell the rather rudimentary script. James already established his abilities as a genre director with the science fiction flick The Machine, but here he shows he can handle horror with a knack for engaging while still crafting a film that’s not off putting to the casual viewer.

This carries over into the finale of the film as it starts to really delve into the supernatural elements of its story, using some strong visuals (although the use of the lights and editing was perhaps done slightly better in Lights Out), and the performances to carry out some of the more ridiculous pieces of the plot. At times I wanted a bit more out of the vague elements of its visuals, including the misty forest “realm” that seemingly runs parallel to the real world, but for the most part it adds a slick style to the atmosphere that works to give it a charming angle. Some of the plotting at this point doesn’t make a lot of sense (or at least it might have been vague enough I missed a few details that would explain some of the bigger shifts and curves that are thrown at the audience), but I was having enough fun that it didn’t detract too much from the whole.

Unfortunately, the second act is where Don’t Knock Twice does stumble a bit. As the film tries to introduce a lot of the plot elements that would be momentum shifters in the third act, it tends to drag. An entire subplot about the fitness of the mother to raise a child comes off as rushed and tacked on considering the increasing importance of the supernatural plot and it runs pretty predictable in how things will play out later on. There are moments where it would just seem that there needed to be an extra draft or two of the script to tighten those moments and craft more effective parallels to get it to work in a more natural way, but the film remains engaging enough that it’s not a huge detriment to the rest.

Outside of a few bumps in the film being a bit too mainstream (flashbacks and remembered lines of dialogue to help explain some of the twists in the story seem unnecessary, for example), Don’t Knock Twice is still a fun flick worthy of a watch. It’s powered by some great on screen performances, a nice stylish atmosphere, and a vicious – if not uneven when it shows up – monster that will make it entertaining for a general audience. More persnickety horror fans may not enjoy it as much for being a tad safe and predictable along with its occasional plot holes, but for me it was a great way to burn a couple hours and very entertaining. If anything, it solidifies director James as one to watch out for as he looks to be one to join the leagues of Wan and Flanagan as a modern horror auteur in his ability to make strong mainstream horror.