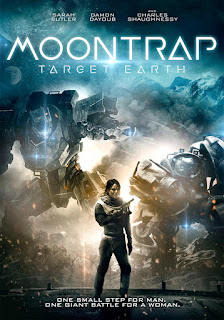 One of my favorite genre mash-ups is when horror and science fiction collide and it seems some of my guilty pleasures from the late 80s and 90s of this genre intertwining have been getting long delayed sequels. Long delayed crummy direct-to-video sequels but sequels none-the-less. The first that comes to mind is the 2009 sequel “Screamers: The Hunting” to the 1996 underappreciated sci fi/horror gorefest “Screamers”. However that hunk of junk doesn’t hold a candle to this quietly released follow-up to the 1989 killer cyborgs on the moon/Bruce Campbell supporting cast vehicle “Moontrap”. 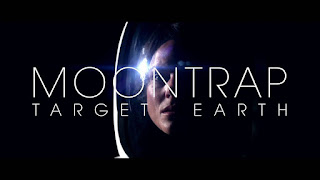 An ancient artifact is discovered buried in the desert and some shady government workers hire some linguist specialists to decipher the hieroglyphics on the side of the craft. They come to the conclusion it’s from an ancient human race on the moon and soon the government agents are out to kill them to hide the secret until some cyborgs come calling.

My first complaint I have with this “sequel” is that despite both original writer and director returning, it likes to tow the line between “sequel” and “remake”. Despite the original having an opening ending ripe for a follow-up, the filmmakers here are scared to make too much of a connection to the original for fear of alienating a potential new audience so they re-image the original concept, just far more poorly. 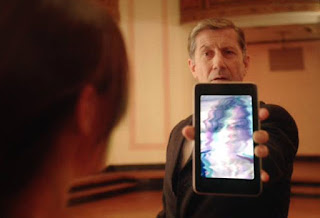 So it doesn’t reference the original, fine, but why does it re-image it so poorly? Well it simply comes down to economics as this film just doesn’t have the dollars to properly portray its ambitious concept onto film (or in this case a cheap digital camera). Despite having a respectable cast for a none-budget film (Sarah Butler of the “I Spit on Your Grave” remake and Charles Shaughnessy of “The Nanny” fame) the none-budget rears its ugly head constantly from cheap green screen shots, low level computer special effects, silted dialogue and short running time. It seems as if director Robert Dyke shot on the run, whenever he got enough money to shoot another scene which would explicate the choppy narrative and unsatisfying ending. 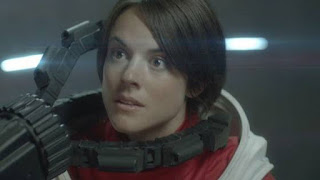 Another problem is the lack of horror elements, which again may be attributed to the budget. The original “Moontrap” was every bit much horror as it was science fiction as the deadly alien cyborgs grotesquely dismembered human bodies to utilize their parts into their own cybernetic framework. This tame sequel has a 'horrific' sequence (though tame) towards the end that references a memorable scene in the original in which a cyborg utilizes a character's face as it's own but it comes far too late in the film and over with before you realize (not to mention if one hasn’t seen the original they would have no idea why that sequence just happened).

The original “Moontrap” was a guilty pleasure of mine with its grisly portrayal of a cybernetic race on the moon. Due to that love I truly wanted to like this 'sequel' but man did this even miss my lowered expectations by a mile. The film’s plot (more inspired by “Prometheus” than the original “Moontrap”) is all over the map and the film just has a cheap look about it, below par even for the likes of garbage made for the SyFy channel. Fans of the original that have a glimmer of hope due to the return the same director and writing team are in good recommendation to snuff that flame out immediately as I cannot describe this follow-up with any better word than “lame”. 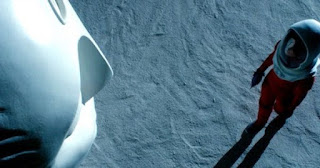 Bonus Rant: People buying this film solely based on the cover artwork are going to be just as disappointed as the fans of the original “Moontrap” due to the version released by eOne/Sony having what looks like two giant transformers acting out 'rock’em sock’em robots' on the moon. Sure there are two lame cyborgs in the film but not to the effect that the cover art portrays. A low ball scheme to get more sales no doubt that is on pare with the shady tactics used by mockbuster film companies like The Asylum.

Written By Eric Reifschneider
Posted by Cronosmantas at 2:20 PM