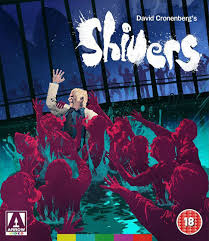 The early films of David Cronenberg’s career are a fascinating look into a style and approach to the off center filmmaking that he would later make an art form. Most of them are more raw than expected, taking his oddly deep commentaries and character development approaches and slathering them in borderline exploitative material. Shivers, the first of a series of films with much of the same tone and approach from this era, might be the first time where the balance started to show itself in an aggressive manner. On the surface, it’s a kind of zombie film that uses its limited budget and setting to establish a great approach to creating tension, but really deep down it has a lot of commentary about the human desire to push forward so far that it ends up resetting us to our primitive instincts (a theme that will run through a lot of Cronenberg’s career.) The results can be a bit mixed as the execution of the film can be a tad scattered, but considering its limitations Shivers is one of those great gems to be found in the cult undercurrent for those looking for it.

A state of the art apartment complex located on a small island in Canada is meant to be the all inclusive living residence for those looking to afford it. It’s so fancy, it even includes its own medical facilities run by Dr. St. Luc (Hampton) and his nurse Forsythe (Lowry). However, something is off lately when a young woman is found killed by a renowned scientist in the complex. Something is spreading among the residents and it’s taking away their inhibitions for everything from sex to murder. Can St. Luc stop it before it rages out of control?

The key to figuring out why Shivers works is to look at what Cronenberg is trying to say with his odd and exploitative approach to what essentially boils down to a straightforward zombie flick. Instead of just some kind of virus or infection that makes these people go crazy, it’s a kind of parasite created by science to improve quality of life that strips them of their humanity and makes them aggressive and animalistic beings. For any other film maker, the use of gore, sex, and quirky horror elements would have been catered to as an exploitation film. For those who don’t ask ‘why’ to all of this, Shivers is certainly just another piece of exploitation cinema . It has enough of those gimmicky pieces to appeal to those looking for just that and Cronenberg certainly knows how to shoot those to appeal to that fan base. There are definitely moments where it plays up to those pieces, including an opening sequence where our scientist proceeds to rip off a woman’s clothes and dissect her on a table in an apartment, so it definitely pushes some boundaries into exploitation there.

However, it’s that underlying message and depth that raises Shivers up above the usual style like many of its peers. Not that I want to go too deep into the analysis, part of the fun of this film is all about reading into its meaning by viewers to make their own assumptions as to what is being said, but Cronenberg show cases why as a film maker he was always has an underlying message to even his most outrageous concepts in film. Shivers is not nearly his most effective at doing this, not nearly as punchy as his 80s material for example, but those seeds are definitely sown here and for fans of the director it’s a welcome sight to see that even in his earlier career he is toying with the ideas.

Perhaps the biggest deterrence in Shivers though is the execution itself. The film is pretty low budget and there are times when odd moments seem to be there for the sake of just pushing boundaries. The performances can range from impressive to off putting, depending on how well the role is fleshed out for the most part, and some of the use of the setting is not up to par with what Cronenberg is able to do later in his career. Fortunately, the Arrow Video version that I rewatched for this review cleans up a lot of the visuals and audio to make it the best that it can look and sound, but even then the budget constraints and green approach can be a bit of a detriment to the overall experience.

Still, even as a very early film in Cronenberg’s career, Shivers lays the foundations and hits many of the great attributes that later films would refine and build on. The budget and some of the execution can be a tad rough around the edges, but the core of this film still works and it works in a lot of unnerving ways that leaves its audience ragged themselves. Shivers is not an easy film to swallow at times, sliding between legitimately thoughtful horror and exploitation film seemingly from scene to scene, but for those willing to dig below the gore, acting, and nudity then it’s a film worth exploring.