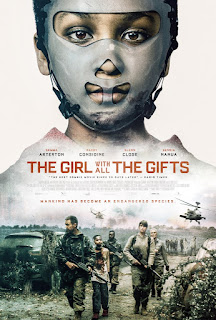 For a while there, thanks to shows like The Walking Dead, zombies came back as all the rage. Sure, that trend perhaps started with Zack Snyder’s Dawn of the Dead remake, but it finally started to die out a few years ago as the casual horror viewer moved onto other trends like vampires, werewolves, or the current demonic ghost/witch that is haunted up the cineplexes. Thank God. It was getting to the point that I just didn’t give a shit about zombies anymore and being raised on the genre, it felt a bit like betrayal. Still, there are a handful of zombie films that pop up now and again, but they are usually of a higher quality and a bit more effective. Last year we got the South Korean melting pot Train to Busan which was excellent and effective at its use of modern zombies. This year, we already have a runner to be the zombie flick to beat, The Girl with All the Gifts. Unlike Train to Busan, The Girl with All the Gifts attempts to use its zombie tropes and superb execution to take the genre into some familiar, but fresh feeling territory. At its heart, it might still be a Day of the Dead kind of zombie film, but its attempts at crafting a social commentary and very impressive characters makes it a heartfelt and emotional film worthy of the praise it has already been receiving.

Melanie (Nanua) is a young girl being kept captive in some kind of military facility. She’s being taught, along with her fellow classmates, like normal kids would be from their kind and thoughtful teacher Miss Justineau (Arterton), but still everyone is afraid of them. That’s because they are infected. Infected with a fungal growth that has turned most of the world’s population into ‘hungries.’ When the facility comes under siege from a growing number of hungries, Melanie must help her would be captors and scientists to survive in a world gone rogue. Can she control her instinctual hunger for flesh to keep them alive or will she eventually be the one that leads them to their doom?

The Girl with All the Gifts starts off in a very Day of the Dead fashion. We are introduced to a group of scientists inside of a military run facility running tests on whether the zombies, in this case called hungries, can be taught and how they function. The zombie apocalypse has happened and it’s the last groups of humanity dealing with the shit fall out of this event. As the film goes, however, it continually builds steam. By the time the first act ends, things have collapsed and a small group is forced to make their way to another base through the heart of fungal zombie territory. The narrative moves in a stunningly smooth manner, the characters are all crafted in realistic tones while maintaining some of the tropes needed for audiences to digest the film easier, and the execution is top notch. The use of fungal run zombies is a nice spin, although not necessarily original and certainly not as controversial as the zombie infection used in a film like Pontypool, and it adds a nice subtle layer about this “plague” being of a more natural and scientific cause versus something more vague or religious in tone.

The key to why The Girl with All the Gifts works, even when it’s treading familiar ground with its plotting or characters, is that the majority of the film is essentially told from the viewpoint of this young girl, who also happens to be a zombie. It’s not a humorous take like Warm Bodies, although it certainly comes with its own set of off beat humor, but it gives a slick dynamic to the story telling and character approaches that sets this film aside from its peers. We care about this girl Melanie, her zombie like flaws, and how she interacts with her fellow zombies and human captors. It adds an emotion to the proceedings that normally shows zombies as a sort of overwhelming force of nature (a subtext still used here, but expanded upon). The performances of the team, particularly from Melanie who simply owns the film no matter what scene she is in, are effective to build on this key component. This is a film that digs a bit further into the complexities of its story, whether zombies are just a weapon against humanity or perhaps the next step of the evolution of the planet, and that comes as a welcome surprise when still too often zombie films are willing to just play the paint-by-numbers game.

The Girl with All the Gifts is simply a well-executed and thoughtful film, powered by a smooth narrative that can slide from dramatic, to tense, to grotesque, to funny, and all the way back through, that’s balanced on a story and concept that’s much more layered and fresh in tone than the general plot or characters may indicate. For the zombie genre, this film remains one of the better examples of how it can be used to be so much more than just for scares and shocks and that is always welcome in my book. Horror fans and those looking for something a bit more from their zombie films should check out the dramatic heft and thoughtful execution that The Girl with All the Gifts delivers. This is the kind of film that will take the genre to the next level.

Written By Matt Reifschneider
Posted by DarkReif at 11:14 PM