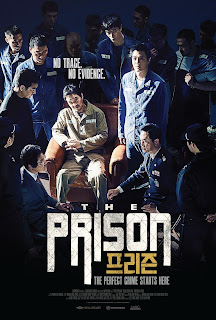 My first Korean film experience of 2017 is one of my favorites of the year so far, by way of the hard-hitting crime thriller, The Prison. Yoo-geon (Kim Rae-won), a once was detective, finds himself entering one of the roughest prisons on his side of the world to approach its king, Ik-ho (Han Suk-kyu), the untouchable man with more power than I've ever seen anyone have behind bars. Yoo-geon's agenda is unclear at first, but as the film carries on and unfolds over the following 2 hours, the pieces come together and reveal one of my favorite finales in recent memory.

Korea is known for churning out excellent thriller after thriller, and this one is no exception. From the moment the film starts, and we see how the world is established, I immediately sank in and was lost in this dog eat dog world where at any minute you can be offed just for looking the wrong way. Some prison films lack that intensity and scariness that you'd associate with life behind bars, but this one does not hold back at all. There are plenty of bare-knuckled throwdowns and blunt objects being bashed into heads left and right; enough to please even the most hardcore of action fans. The film never goes too big in that regards and instead keeps things grounded, which is perfect for this type of story and helps add a layer of realism to an already very gritty story. 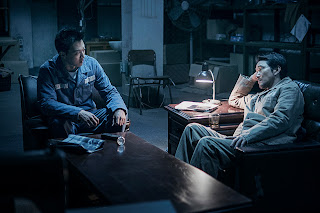 In terms of the story itself, I don't want to dive into the who and why of anything, as I think the film does a nice job in slowly revealing said things itself, and the advertisements didn't really paint a clear picture as to what was going on which I very much appreciate. Almost every person in this film is disgusting and vile, but never cartoonishly so. It is great when a film full of awful people can hold my attention in this regard. It's like peeking in on a life I hope to never have and being able to revel in all its filthy glory. Not sure what that says about me, but I digress. Eventually, the characters take shape and reveal their intent and depth with some backstory eventually happening with our lead. It's simple, but effective and works to help progress the story forward without ever spending too much time in flashbacks, to suck us out of the moments of what is going on in current time.

I really enjoyed the atmosphere and the lighting was nice and varied; sometimes very stylized with its shadowing, giving a real sense of dread and fear from the king and his henchman, and sometimes it cuts back and just captures naturally and lets the performers take charge. It knows perfectly when to give, and when to take, and walks a fine balance. On the other hand, the same cannot be said for the score... it's loud, obnoxious, and intrusive at almost all the wrong times. Not sure what the thought process was behind that, but it took me out of the experience on more than one occasion. That being said, in that lovely and unforgettable finale, the music swells quite nicely, and accompanied the acting, leaving me in awe and heightening it all to perfection. 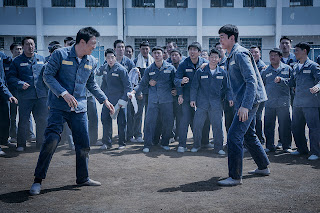 That finale I keep mentioning, I can't get into for obvious reasons, but let's just say everything builds up to an almost unbearable level of intensity and, with all the aforementioned things I've stated, I think it will go on to stick with me and always be one I can call back to and mention in conversations on cinema for years to come. It is truly a stand-out moment in all of my movie viewings of the last several years, and it helps push this film from good into a popcorn piece that is truly great. It is dark, but very much so entertainment at its finest. It is darker than a lot more of the other blockbusters coming out in its region recently and it really helps it stand out from the pack.

Aside from the film's rather annoying score, and some bloated stops in time along the way, The Prison punches, kicks, and stabs its way to the top of the genre and claims itself at the top and it does so quite confidently. Definitely a best of the year for me thus far, and I think it will continue to fight for its spot, and do so quite well. The Prison is a must see for any cinephile and Korean cinema enthusiasts should have a new favorite to add to their lists.