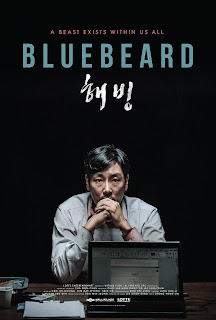 Director Lee Soo-yeon returns with her first feature film since 2003's The Uninvited, with the mind-bending psychological thriller, Bluebeard. The film centers around Seung-hoon (Cho Jin-woong in a much deserved leading role), a colonoscopy doctor who ran his own facility in Gangnam, but closed down due to financial struggles, that finds himself in a small town area in Seoul that runs along the Han river where unsolved serial killing remains to this very day.

Unlike most horror flicks this day and age, Bluebeard is a slow burn, dripping with atmosphere and a very overwhelming sense of dread. It is shot brightly primarily and most of the outdoor scenes are filmed in the day, but Seung's world is inhabited by very odd people who give off unnerving vibes of utter creepiness. While doing his rounds on the patients one hot afternoon, an old man begins to confess the location of mutilated body parts scattered about the river and the city and, before you know it - going further than the advertised set up, Seung quickly finds himself wrapped up in sudden serial killing cases and things get really weird and spiral out of control in a mostly solid outing.

The strong point of Bluebeard is its shining star, Cho Jin-woong. The man has appeared in handfuls of films over the years and has been in many a great director's works with his most recent and perhaps most notable role being that of the old porn pervert in Park Chan-wook's The Handmaiden. Without going on too much of a tangent, it is worth mentioning that this is Cho's first and in my humble belief, very deserved and highly anticipated leading role. He carries the film and really brings you through a plethora of emotions as his character seems to go through hell and you are right there with him. The warmness that he carries in his personal life and many of his films is present here throughout, but by the final act and after things have taken plenty of turns, he keeps it all together and gives a very noteworthy performance. I can't, again for sake of spoiling, go in depth with it, but it will get him some nods later this year I do believe.

On a technical level, Bluebeard shines and features some impressive editing and an awesome score. I am not a fan of fade-to-blacks, but there are quite a few here and most of them work given the dreamlike confusion the film gives off time and time again. The cinematography is solid overall, and I really appreciated how many static shots there were in a classic sense, mixed with some more stylized techniques. Some worked great and were genuinely chilling, while others didn't, but overall it's pretty impressive stuff. The score is also worth mentioning, as it has a lot of creepy music and plenty of interesting choices through out. In fact, I think overall, aside from some annoying and cliche rise-to-a-screech violin cranks, it remains a standout piece and one that I wouldn't mind hearing isolated from the film.

If I had to complain, and I feel I must mention it, it would be towards the story. It isn't exactly the story itself, it would just be where it goes and how many times it decides to twist and turn. It does it so much so that by the credits, it became exhausting and no longer surprising or thrilling. Sadly, I think it really hurts the film in the end. I don't think it is without flaws along the way, but the acting and atmosphere really help to keep the audience absorbed. The supporting cast and even the smallest characters seem to really shine and do their part and when things start making sense finally and key things are revealed it goes from being phenomenal, to being mediocre, to being annoying.

When all is said and done, Bluebeard is a nice way to showcase what Cho can do and it is even more cool to see Lee return to directing feature films. Let's just hope her next film doesn't take quite so long to get here and that she cools it down with how smart she thinks her script it because it was and then she pushed it over the edge. Like the serial killings in the story, she should've stopped before she exposed herself, but sadly she didn't. Awesome film, one that I would highly recommend, but sadly it runs way past its mark and wears out its welcome. Recommended with caution. There is a lot to enjoy here, but just as much to be annoyed with.