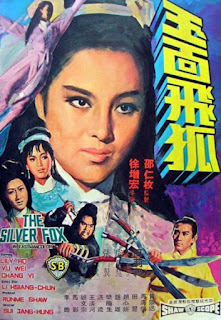 My expectations for The Silver Fox were mixed. The mid 60s for Shaw Brothers is a time where the studio was still finding their voice and approach to what they wanted to do as a film company, but by 1968, when The Silver Fox was released, the studio was starting to crank out some solid films in the wake of The One-Armed Swordsman and Golden Swallow so I wasn’t quite sure what kind of film that this one was going to be. In what seems to be a fitting manner, The Silver Fox is ultimately a little of both. There are moments where this film reaches some of the fun heights that this era of Shaw Brothers can hit, but it’s also dragging in some of its romantic melodrama and a bit inefficient in weaving its tale of revenge. Still, as a wuxia, The Silver Fox is a fun film with a lot of great treats for fans and worth the time.

It all comes down to a gold plaque. With one of the biggest security bureaus hired to make sure the plaque gets to its destination, rumors start to float down that a legendary bandit, The Silver Fox (Lily Ho Li-Li), is already poised to steal it. When the question of why arises, it may come down to a conspiracy and familial feud with the security office’s boss that means to leave a trail of dead bodies in the wake. Only a young prince, offering his help to transport the plaque, can unravel the mystery.

Two-thirds of The Silver Fox is straight up awesome. The opening of the film is classic Shaw Brothers as two brothers become entangled in a power struggle that leaves one crippled and the other unrightfully as the heir to the school they have been training at. It features some crazy twists and turns and sets the stage for the rest of the film to be built on. The final act, which sees the events of the opening come back together 18 years after the fact, is also pretty stellar. It throws in a ton of great fight sequences, a classic series of deadly cave traps, and plenty of even crazier twists that had me hooked. The dynamics between the Silver Fox’s clan and the security bureau is fun to watch and the cast is giving it their all in many of these ridiculous scenes. It even gets pretty creepy at times (Silver Fox’s father wears a creepy ass mask that gives it an odd horror tinge that’s a lot of fun), but it remains effective in these two acts to keep an audience intrigued by how everything is going to turn out.

The second act, however, is not nearly as effective or entertaining as the first and third. Setting up the main plot with the golden plaque and the characters for each side tends to drag out a bit too long and focus too much on the melodramatic romantic subplot that doesn’t resonate nearly as well as it should between Silver Fox and the young prince. While the casting here is still beneficial to the whole and that cast gives their best in performance, it tends to take too long in setting up the connections between the first and third act to really move at the entertaining pace it needs to carry the momentum. There are certainly fun moments including how damn near everyone in the film gets poisoned at one point or another or how Silver Fox escapes capture in one of the strangest manners possible, but it spends too much time developing the romantic plot that doesn’t feel natural or all that meaningful to make it all work. Director Hsu Tseng-Hung tried this same structure with his Red Lotus Temple trilogy, taking three films to really cover the entire story, and while it comes off as much more entertaining and efficient than that, it still suffers from this kind of stage play theatrics that don’t mesh with the over the top action tones of the opening and ending.

Still, two out of three acts is a winning percentage and The Silver Fox remains fun and entertaining enough to keep most Shaw Brothers fans hooked into the story its telling. It’s a lot more layered in its character interactions and performances than expected and features plenty of great wuxia action sequences to satiate those cravings and for that I have to give The Silver Fox a solid recommendation. It features some fun performances and the opening and ending seal it as a great gem in the 60s Shaw catalog that fans will find as a pleasant surprise. It’s not quite up to par with some of the other classics from the era, but it’s worth digging into for those interested.