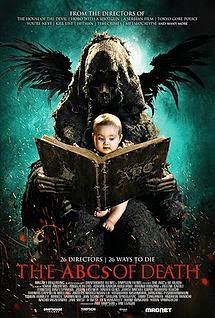 What makes a film like "The ABCs Of Death" so damn hard to review is the fact that it is 26 short films. If anthologies were already hard to address due to a variety of styles and quality between shorts, this film is the mother fucker of them all. With 26 short films, the variety is massive and so is the quality between segments. "The ABCs Of Death" has a little bit of everything in a scatter-shot sort of way and there will be something that everyone loves...and something everyone hates. So even though I'm going to attempt to digest it down for you below, I would just suggest taking a gander at the film to see if you love more than you hate.

CONCEPT: 26 up and coming horror film directors are given a small amount of money and a letter of the alphabet and told to make a short film that has a death sequence in it. "The ABCs Of Death" is that compilation. 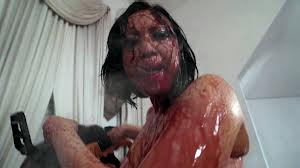 The idea for "The ABCs Of Death" is awesome. In a way, its worth the purchase just to support the support that a film like this gives these young filmmakers. So already I have to say that you should probably just watch it and buy it even if a few of them are worth your time. In the cult film world, we are all about supporting the artist and despite some quality issues I do suggest at least giving this film a chance. 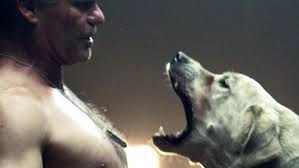 As for "The ABCs Of Death" itself, the film tends to be more miss than hit. The quality of each short ranges from high end science fiction grade action (for the letter 'V') to $5 and no thought whatsoever on a house hold camera (for the letter 'M'). Granted, the style of each short can be impressive at times even if it makes little sense like the abstract short for 'O' or the narrative heavy and high impact of subtlety for the letter 'I.' To be honest, the diversity here is so massive that its hard to even cohesively describe the film as a whole without leaving out someone. The hard thing to swallow is generally how mediocre most of these are. Going into the film I felt like I would love a third of them, be apathetic toward a third of them, and dislike a third of them. I would say that ratio is not correct. I tended to be apathetic towards almost all of them with a few hated ones and only a handful of them I genuinely enjoyed. The slow motion twist of 'D' and the gross intensity of 'L' had me riveted, while the almost arthouse/grindhouse style of Eisener's 'Y' segment certainly catered to my tastes. Beyond that, I was massively disappointed. With some of the talent that was involved in this, I would have expected a little better overall. I mean, Ti West is one of my favorite horror directors in the scene with his ability to craft tension and atmosphere with so little and his segment was one of the worst, if not, the worst. In many ways, it's hard not to judge by the names attached to this and by doing so I had much higher expectations then what this film delivered. 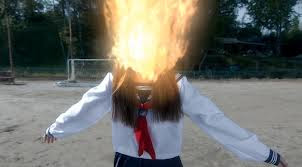 Needless to say, if you are a fan of horror there is (more than likely) something here for you to enjoy.  There is some charming pieces, some funny pieces - including 'Q' which ranked up as one of my favorites, some bat shit crazy pieces, and even some animated ones. Horror fans are destined to find something. Unfortunately, overall, the film lacks 'oomph' and too many of them disappoint in cleverness, impact, and execution. With the group of people already attached to the announced sequel, let's hope the overall quality only goes up from here.