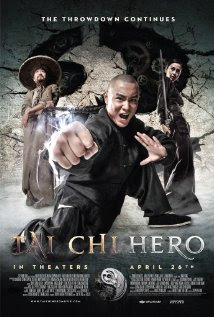 I loved "Tai Chi Zero." It was a modernized kung fu film of epic idea with its steam punk elements, video game inspired graphics, and quirky humor. It was fun, heartfelt, and most importantly - awesomely entertaining. This is perhaps why my expectations for the second half of the entire film, dubbed "Tai Chi Hero," were so high. This might also be the reason for my disappointment overall in the film. As a sequel it certainly hit all the marks it was supposed to with its bigger scope and more complex story, but it also strayed further from the some of the writing elements that made the first such a blast leaving it feeling like it tried a bit too hard.

When we last left our hero Lu Chan (Yuan Xiaochao) in "Tai Chi Zero," he was on the verge of marrying Chen Yu Niang (Angelababy) as her dedication to saving his life when he sacrificed himself for her. Her father, the leader of Chen Ching Xiang (Tony Leung Ka Fai) seems to think she can cure him of his ailment by training him in their familial kung fu and with a little love. The problem then remains as her brother mysteriously shows up and stirs up rumors of a prophecy meant to end the village. And on the horizon, scorned and scarred, Fang Zi Jing (Eddie Peng) is plotting his revenge against Chen Village by building an army to take there.

What I love about this franchise, and I do understand why people would dislike it for these very reasons, is just how much fun it has with its characters and premise. The over the top abilities of its kung fu participants makes for entertaining fights, the video games inspired graphics - which in this film includes a little fighting game nod as Lu Chan has to take on a serious of disciples to find a mysterious master - are always quirky fun, and the characters are heartfelt. "Tai Chi Hero" does display these elements in full. Lu Chan gets to throw down in over the top situations with his elusive brother in law, fight against an entire army, and has a memorable finale one-on-one on top of kitchen walls against a kung fu master while the romantic sub plot is sweet in its simplicity as Chen Yu Niang begins to see his idiocy as endearing. There is a lot to love about "Tai Chi Hero" and its characters are certainly relatable.

Unfortunately, most of these are moments of a larger whole. That larger whole being this idea of Eastern kung fu spirituality and simplicity of life versus that Western need for expansion and greed. This is where the film tends to try a bit too hard. The elusive brother-in-law plot strikes too much of a resemblance to the entire plot of the first film as his torment in the hands of Chen village leads him to turn to machinery and engineering (even if his turn around in character is justifiably effective) and our main villain Fang Zi Jing seems to have become a rather 2D caricature of his previously sympathetic self. In fact, most of his screen time is spent rushing through his underhanded rise to power to lead an army and an ill-explained alliance with a Western business man who is sinisterly played by Peter Stormare (a favorite actor here at Blood Brothers and always a smart choice for a dick villain). The motivations here are either redundant or quickly brushed over and it leaves us never feeling the true danger for our protagonists.

I must also mention that I really disliked the ending of the film. Here be a few small spoilers people. Forewarning. While I disliked the ending of the first film for being "To Be Continued" and leading into "Tai Chi Hero," this film feels like it wraps up very quickly. We get our final fight on top of kitchen walls as Lu Chan defends his claims to the Chinese government and it feels like it might be moment that's leading towards a true climax of epic proportions since we had an army battle previously. And then a narrator pops up and sort of says "...and everything was happy ever after." WHAT?! THAT'S IT?! No, final kick ass battle as Lu Chan leads a group of investigators into war against Fang Zi Jing? No falling action as we see Lu Chan and his wife settle into a regular life? None of that?! I understand that the idea was for this to be the second part of a trilogy, but with no confirmation of the finale film at this point, it's hard for me to find this acceptable. I was really digging into these characters and this is all that "Tai Chi Hero" left me? It's very frustrating.

Besides an ending that left me jaded and some oddly brushed over major plot points featuring our villains, I did quite enjoy "Tai Chi Hero." This franchise is simply a blast as it combines classic kung fu plot progressions, fun and strong characters, and modern flashy film making into a big ball of entertainment. I sincerely hope that a third film in the series gets made so that I am not left hanging on that ending and that we get to ride along with the lovable Lu Chan one more time at least. Don't let Lu Chan die, people! You can support the series by purchasing your copy of the film at the links below anyway. You should do it right now so that I can see how the filmmakers intended the film to end!