Look at me friends, I am on it this week. Another review for you to check out.

Maoyu is available on Crunchyroll streaming. I hope by now most of you have at least heard of this little gem of a site. Now we have a new player in the streaming field check out daisuki.net. So if you people of the web have time drop by and say hello its a pretty sweet site.

Synopsis- Sent out to destroy the Demon King, our hero named, yes you guessed it, Hero is quite surprised when he arrives at the Demon King's castle. You see this Demon King is a well put together redheaded stunner. Her name is Mao and she has more than a few surprises in store for Hero. The world of humans and demons is on the brink of war and Hero sets out to end this war before it starts. In order for that to happen Hero thinks he must kill the Demon King, however he quickly learns Mao is no ordinary Demon. She is all willing to end the war even if it means the end of her. The two enter into an agreement and the adventure begins. 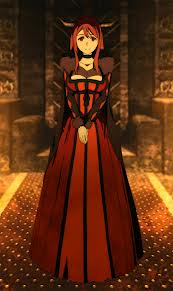 Review- My first thought after seeing Mao was "oh great, another anime about boobs" I was way off. While she is well endowed in the chest area that is not a focus of this series. "Maoyu" is more about war and the cause and effect of it. It's a story that really hits on the current state of real world. From economic struggles of war ravaged countries to the players that benefit most from war. After a couple of episodes I started to think this anime seemed familiar and sure enough it has the same writer and director as the ever popular
"Spice and Wolf." While similar in both visual set up and economic education, the comparisons end there.
"Maoyu" has a fantasy setting to the core, but with a slight spin on it. I like how most characters are nameless generic pieces. Case in point: Hero. He is the hero of the story and nothing more. Mao is the mage and then of course the trusty female knight. Then the story turns and puts the characters into unfamiliar situations.
Now to be fair and honest,  this anime has very little action/fighting and can be boring at times if you aren't into this type of series. My expectations were slightly misguided by the original synopsis I had seen, but none the less there is a lot to enjoy here. 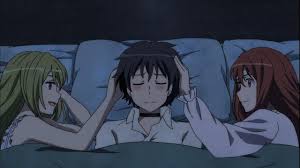 If you like cute love stories then "Maoyu" has a little to offer you. Most of the humor throughout the series is derived from the love story. If you really like economic driven stories then, BAM nailed it. All in all I really enjoyed "Maoyu" and its subtlety. The artwork and animation are spot on for what I expect from a fantasy anime. It is not the epic fantasy of heroes and villians that I was expecting but for me it was fun. If you liked "Spice and Wolf" and others like that then I think its a must see. Not likely to be everyone's favorite anime it does give us a nice break from all the in your face non stop actioners out there. With that said I give "Maoyu" a: