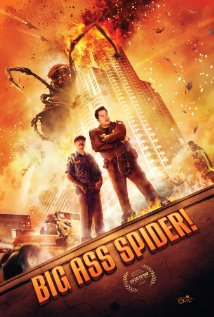 Mike Mendez is a man to look out for in this day and age of terrible horror sequels, remakes, and rip-offs as the director is a man whose enthusiasm for the genre is bursting out the seams. Taking his hand at the large killer arachnid picture, “Big Ass Spider!” is a film that mixes sub-par CGI and humor perfectly. To create the fun popcorn flick, Mendez embraces the re-hashed material and common characters found in the government experiment gone wrong scenario and blends it with a humorous buddy cop movie vibe. This leaves us with a film that delivers the laughs which come off more intentionally than a late night Sy Fy flick.


We are introduced to Alex, a pest exterminator with a specialty in spiders who seems unable to find his luck with women. When going to the hospital to treat a spider bite, something is uncovered in the morgue of the hospital to which he offers to investigate and get rid of. The military gives our unlikely hero a visit as they get them off the case to eradicate the spider themselves. Soon Alex and his new found sidekick Jose, a Mexican-American hospital security guard, go on the chase to hunt down the vastly growing creature against the military’s wishes and find that they’ve got more than what they bargained for.
What makes a movie like “Big Ass Spider!” so enjoyable is actually the cast, in particular Ray Wise as Major Braxton Tanner and Clare Kramer as Lieutenant Karly Brant, Alex’s love interest as well as our two leads. But nobody shines more than Lombardo Boyar who plays Jose, the security guard. With his super heavy accent and his go get him attitude, the dialog that comes out of this character is truly hilarious. As a matter of fact, practically half the humor seems to come out of our hero’s new found sidekick with his stereotype played out very well. Greg Grunberg also plays Alex flawlessly and the chemistry between him and Boyar is definitely there. A cast can only work with what they’re given, making writer Gregory Gieras another star for this film. With Mendez’ embracing the genre and Gieras’ great script, “Big Ass Spider!” comes out as a film that is very aware of its hokey title and just runs with it. The characters are supposed to be cheesy. They’re supposed to be more one dimensional, and it’s alright because this is obviously a film that doesn’t take itself seriously and is more satire than anything else.
What distinguishes “Big Ass Spider!” from the hordes of nature run amok Sy Fy and The Asylum films is its quality. The budget is higher and the quality of the performances from the more seasoned actors along a script actually had some thought put into it with its well written satire. Mendez and Gieras are no strangers to B movie sensibility and in this case it has worked to their advantage. Our feature is obviously not out to win any awards, but to simply entertain. So knock off those shoes, get a beer and some popcorn with your friends, and prepare to simply have a good time with “Big Ass Spider!”

Written By Elise Holmes
of
Ramblings Of A Deadite
Posted by DarkReif at 12:23 AM