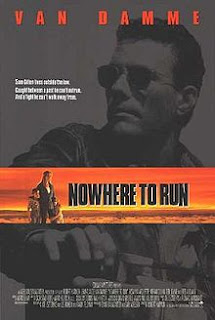 After the success of "Universal Soldier" in 1992, Jean-Claude Van Damme was on a roll. Just in the next few years he would be an A-list celebrity with hits like "Hard Target," "Timecop," and "Sudden Death." So what about the lesser known "Nowhere To Run" that was released in 93? Could it be the Muscles From Brussels had released an overlooked gem in the midst of all of his awesome action films of the 90s? The short answer is simply no. While "Nowhere To Run" has some occasional moments, the majority of the film is a forgettable affair of predictable plot progressions and lackluster characters. It's easy to see why this film gets looked over.

Sam (Van Damme) has just made a daring prison escape with the help of his friend. Even though his friend died in the process, Sam is desperate to make amends for his previous life and he finds an opportunity when he stumbles into Clydie (Arquette). Clydie has a problem. Her land and house are going to be forced from her hands by a corrupt businessman (Ackland) and his "security" man (Levine), so its up to Sam to make sure this doesn't happen.

Despite its glorious character actor cast and its rather simple, we've-seen-it-a-thousand-times premise, "Nowhere To Run" is about as forgettable of early action films as they come. Director Robert Harmon (known mostly for his stunning "The Hitcher" film previously) seems to have an eye to keep the action paced well, but most of the issues come from the film's focus on the drama. As much as I love seeing a film about a man seeking redemption and finding it by serving justice to the stepped on, this film gets to be a little...awkward. Some of this has to do with Van Damme's inability to carry the film as the lead. His character is the quiet strong type and while he has the look and presence for it, his ability to act without dialogue can leave a bit to be desired. Not to mention, what dialogue they did have was kind of awkward too. It's great entertainment to see a little 5 year old girl talk about the size of Van Damme's penis. It really is. Really the only person that made a full attempt to act here was Arquette and she sort of gets pushed to the side for the predictable plot. Nothing all that original happens and if you can't guess how it all turns out in the end by the first 15 minutes, you don't watch enough made for TV movies.

Luckily, the film does keep itself at a brisk pace and Harmon keeps the action moving even if most of it comes off as predictable too via the basic script. He has a wicked killer opening with the prison bus break out, but the film sort of meanders from there in its focus on familial drama. We get a relatively fun introduction to Van Damme's character when he first meets the family by kicking ass and there is an over the top motorcycle chase that features a B-grade action worthy Van Damme leap onto his motorcycle to start it. Unfortunately, most of it is not quite memorable enough to carry the film through its ABC formula and it ends up falling flat despite Harmon's best efforts to make it awesome.

For Van Damme fans "Nowhere To Run" might tickle the fancy to see him in his perpetually gelled hair and high waisted jeans, but the film lacks flair and stronger action set pieces to set itself aside from the other films he was doing at the time. Hell, the film even lacks the patented 'Van Damme Spin Kick.' While Harmon tries to keep it interesting with thoughtful camera work and some nice visual things, he simply can't save the film form its own poor scripting and some wooden acting performances. This is not the gem I was hoping it would be and its quite obvious why it's overlooked. "Nowhere To Run" is mostly for fans.