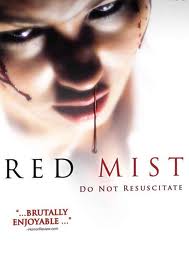 Occasionally I find it fun to randomly choose a movie to watch on a lazy day. No preconceptions. No thought in the choice. A random new movie to spend some time with. This is how I came about to watch “Red Mist.” I remember seeing it for rent years ago, but never gave much second thought to it until I stumbled across it today on Netflix Streaming. In that fit of ‘what the hell,’ I decided to watch the supernatural slasher. While it definitely has its moments, the odd combination of elements leaves quite a bit to be desired for it to have the impact it wanted to leave and it fades from memory quickly.

Catherine (Kebbel) and her friends are desperately pushing to be the best doctors they can be, but their youth and arrogance occasionally gets in the way. Particularly when a poor decision leaves a young and jaded man in a permanent coma. To try and bring him out of it, Catherine injects a new experimental drug into him. With no results at first, she gives up trying. Now her friends are all dying around her at the hands of innocent people and there is only one person that would know their secret…and he’s in a coma.

Come to find out, “Red Mist” is from the director of “Shrooms.” I quite enjoyed the psychedelic twist on the slasher his killer in the woods film and in many ways “Red Mist” shares many traits. Despite their silly premises, director Paddy Breathnach crafts each one with a deadly serious approach and focus on atmospheric tension. With “Red Mist” its enough that the first half of the film feels more like a thriller version of a hospital themed prime time TV show with the interactions between the friends and really building up the circumstances for what the last half of the film will include. It gets a little long winded her and it’s a bit too cliché for me to care too much about any of the characters. Oh look the Goth chick, the rich bitch, the dick head arrogant guy, the nice pretty guy, and the goody too shoes lead heroine – they’re all here! We can start the movie! So it doesn’t necessarily start off on the right foot even if Breathnach tries to build up mystery around our future coma patient with some awkward flashbacks to his childhood.

From there, the film straight up dive-bombs into the supernatural slasher. In an odd combination of “I Know What You Did Last Summer” and “Patrick,” “Red Mist” collides with some effective moments. The kills can be vicious and unique, I’m not going to give too much away with hows or whys, but the film definitely gets better from this point. The special effects are impressive for a relatively low budget film and Breathnach keeps the tension up enough to keep the viewer’s attention and make the kills effective.

Unfortunately, the ending ends up a lackluster one that sort of ends. The climax of the film doesn’t nearly build up enough to be worthy of the rest of the slaughter even if it has a few surprises. It sort of just…ends. A rather lackluster way to end the film as it finally started to build some momentum.

To be honest, “Red Mist” is the kind of film that’s easy to watch and forget overall. It has some stronger moments and Breathnach definitely does his best to keep it tense and serious despite its “X-Files” like premise. Overall though, this is mostly a rental for one of those lazy days and I had no qualms watching it on Netflix Streaming.