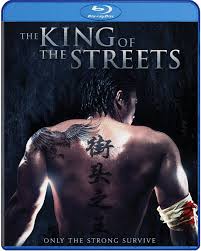 Call me crazy, but when I receive a film to watch that features a first time director/actor/writer/choreographer fulfilling his dream project I am a bit hesitant. That kind of statement might be special to hear about someone fulfilling their dream, but it tends to frighten me with nightmares of amateurish film making and terrible rookie mistakes. Luckily, Yue Song seems fairly competent in all of his roles. Not only is this the kind of film he wanted to make (you assume he couldn't be compromised too much), but its a decent little independent action flick. It falls prey to a few of those rookie mistakes I made mention about, but not nearly as many considering the amount of work he placed on himself.

Yue Feng has a second chance. With a fierce attitude and the street fighting skills to match, he rose to become 'the street fighter' as a youth only to find his time on top cut short by a murder charge. Eight years later he is released from prison a new man with new goals. To only use his skills for good and only when absolutely necessary. Struggling to stay afloat and cut off from his former family and friends, Yue Feng finds comfort volunteering in a small orphanage. Unfortunately, a vicious mafia is looking to claim the land for their own by any means necessary leading Yue Feng to take up his fists once again and reclaim his title as king of the streets.

"The King Of The Streets" can get a little cheesy. Volunteering at an orphanage, his best friend has become a notorious street fighter in his absence, a romantic love plot seems to follow all the cliches...many of the elements in this film have been seen before again and again in these kinds of films. What's intriguing about this film is not about all of the formulas that Yue Song seems intent on retreading, but the extent of artistic nature that he uses when he goes about it. The film doesn't embrace the cheese like it could have, it instead seems to focus on the main character's growth - relying on some cleverly edited flash backs (which do get to be a little redundant by the end) and some intriguing moments to push this point. To be honest, Yue Song even carries the film decently on his rookie shoulders as an actor. He might not be taking home any awards with this role, but dammit I felt for the guy and he had me hooked about how things would turn out.

Occasionally the film falters on its artistic attempts, an eagle focused running theme seems awkward and sometimes the color schemes and visual choices for the film feel a bit forced, but it generally works overall. Even the chemistry and secondary characters tend to be a little underdeveloped and weak including some humor infused early "friends" that sort of disappear after the first act. The friendship between our lead and his best friend from his earlier days tends to feel underdeveloped too despite the two actors having some very strong chemistry on screen which is a bit disappointing. Even with all of this though, it's hard not to find the film charming on some level.

As for the action, Yue Song is a star in the making. "The King Of The Streets" is rooted in very realistic fight set pieces and it works wonders for his more dramatic story. Yue Song takes on a slew of men all at once, pitting fists, feet, pipes, and even swords into the film with impressive results. It helps when the film includes real life fighters in a plethora of different styles for him to go toe-to-toe with and it makes for a fairly riveting action film in this regard.

"The King Of The Streets" might not be a wholly original film and it occasionally stumbles with Yue Song's rookie mistakes, but the film was of much higher quality than I expected. It's thoughtful in all of the things it does, it carries a nice brisk pace, and Yue Song is able to give us both strong fight sequences and a character to root for - a duel ability that can be lacking in low budget action films. Although this is not a film for everyone, I was certainly taken back by how much I enjoyed it. Action fans should be more than pleased.

This film will be available August 6th, 2013 from Well Go USA. Pre-order it at the links below!