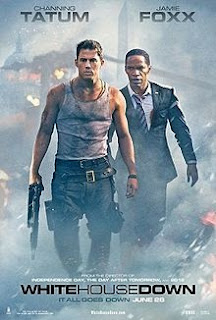 Do you guys remember when Roland Emmerich did awesome movies? The man that did "Universal Soldier" and "Stargate?" The one that hasn't been seen in years replaced by a man obsessed with destroying various cities and monuments in disaster films? When he did tried-and-true over the top action films? You're in luck. That's the Emmerich that shows up for "White House Down." Granted, I have yet to see the other White House Gets Attacked film this year, "Olympus Has Fallen," but I have to say that "White House Down" was damn near the perfect blend of old school action with modern set pieces. It was gloriously over the top, funny with chemistry, and entertaining as hell. Yeah it has it's flaws writing wise, but dammit I was into the film from beginning to end.

John Cale (Tatum) has been desperately trying to work his way up as a security man at the White House. His track record unfortunately does not show his best sides outside of his war experience and even his daughter (King) doubts his dedication to making things work. When he takes his daughter on a tour of the White House when he has an interview for Secret Service, little does he know that a group of rogue militants have a plan to take the White House and the President (Foxx) hostage.

Considering we've had two "Die Hard" in a White House flicks this year, I was concerned considering the lack of actual "Die Hard" material we had in the last "Die Hard" film. Again, fear not, as "White House Down" was the film we all wanted out of "A Good Day To Die Hard." In fact, "White House Down" might be a little too "Die Hard" at times. It follows the formula too well in its plot as a relatively normal guy trying to do his best and failing at life is thrust into a situation he has no way to handle but does anyway, that it feels like a re-worked "Die Hard" film to begin with. Even Channing Tatum seems to be doing his best Bruce Willis impression with his wise cracking remarks, deer in the headlights action sequences, and dirty wife beater final act. While this is obviously a formula that has worked for plenty of films, it does seem a bit too well treaded here to inspire too much engagement thought wise even if there is plenty of political agendas and subtext for the audience.

With that being said, hell yeah did I enjoy this movie for what it was. A bit too cliche might describe the proceedings of its plot as it essentially follows a formula we've seen a ton of times in action films. As I'm a fan of saying though, it's not about originality, but execution. That's exactly what "White House Down" does well. We all might recognize the patterns and the basic character outlines, but this film has fun doing it and that fun is contagious. The banter between Cale and his daughter, the extreme asshole that is the main villain's henchmen (who seems to be doing a quite impressive Dolph Lundgren impression here), and eventual teaming up Cale and the President to kick ass. This film is pure fun and excitement punctuated with sarcastic one liners and explosions.

Which brings me to what we truly came for: the action. While "Man Of Steel" showcased an action film where the action was boring and unconnected with its audience, "White House Down" has enough over the top action with a variety of sequences and styles to make up for my distraught over the super hero misfire. This film has everything. Fist fights on top of the White House, gun battles, a toaster weapon, hostages, three helicopter wrecks, tanks, and they even somehow get a car chase that is bound to the White House front lawn (to much awesome humorous remarks). Considering they only have essentially one location, Emmerich and company pack a whollop of action into it. Tatum earns his role as lead action star here (although I would argue his fist fight in "Haywire" might have been better) and the rest of the cast ably fill the action roles needed. To be honest, as an action connoisseur "White House Down" fulfilled all of my needs.

While "White House Down" might not be the best action film released this year (sorry, but "Furious 6" still holds that title), it damn well makes a run for its money. It's funny, charming, and exciting. Yeah, it might not be all that smart and follows the formulas a little too closely - but the execution here was superior and I highly recommend this film for action fans.